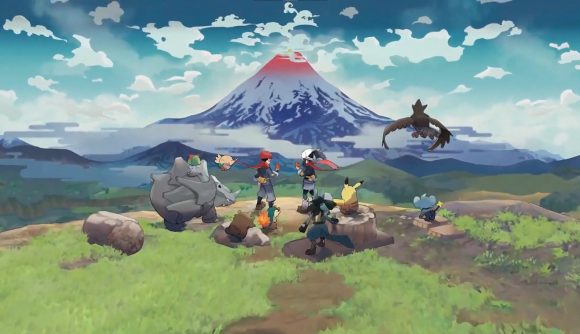 More details about Pokémon Legends Arceus have been announced at today’s Pokémon Presents, including a new name for the ancient lands of the Sinnoh region, several new regional forms and evolutions of existing Pokémon, and a brand new battle system.

We’ll start with the region, and while it takes place in the same part of the world as the current-day Sinnoh region, it is known as Hisui. This ancient region is set in a time before the connection and relationship between people and Pokémon was established, and has various biomes circled around Mt. Coronet.

Within Hisui is a plethora of existing and new Pokémon. Of the new Pokémon shown at today’s Pokémon Presents, we saw Hisuian forms of Growlithe and Braviary. Both are given new typings, with Hisuian Growlithe being a Fire/ Rock-type, and Hisuian Braviary being a Psychic/ Flying-type. There are also new evolutions revealed for Stantler and Basculin. Stantler can evolve into Wyrderr, a Normal/ Psychic-type, and Basculin can evolve into Basculegion, a Water/ Ghost-type. Basculin will apparently evolve when it is “possessed by the souls of other Basculin from its school that could not withstand the harsh journey upstream.”

Hisuian Braviary, Wyrdeer, and Basculegion were all seen being used as rideable Pokémon in the presentation.

Check out our list of all the Pokémon Legends Arceus confirmed Pokémon to see which others are returning for this game.

Another headline feature is a new battle system. While Pokémon can be caught without the need to battle, some stronger or aggressive Pokémon will need to be weakened. If you need to battle a Pokémon, you select one of your party, and throw a Pokéball out next to your target to begin the battle.

The turn-based system has been shaken up, however, as moves can potentially be used in succession depending on the style of move and the user’s stats. Similarly to the Single Strike and Rapid Strike mechanic introduced into the Pokémon TCG, Legends Arceus will allow you to use moves either in Strong Style (more powerful, but with less chance of being used consecutively) or Agile Style (weaker in terms of damage, but more likely to hit consecutively before the opponent can also use a move).

Because of this radically different battle system, it has been confirmed that ranked Pokémon battles will remain in Sword and Shield and will not be available in Legends Arceus or the Diamond and Pearl remakes.

The lore and story of Legends Arceus has been further explained too, with the protagonist working for the Galaxy Expedition Team, which looks to research and document wild Pokémon. As the protagonist, you can choose to play as either Akari or Rei.

The Galaxy Expedition Team will task you on going on Survey Outings to help their research and complete the Pokédex. For these, you will head to a base camp where items can be bought or crafted and Pokémon can be healed. When out on your Survey Outing, if you take too much damage from wild Pokémon you will black out and return to the base camp.

Those are the headline changes, but Legends Arceus definitely has more up its sleeve that will change the way we play – and maybe even think – about Pokémon. Preorders are live right now on the Nintendo eShop ahead of the Pokémon Legends Arceus release date.