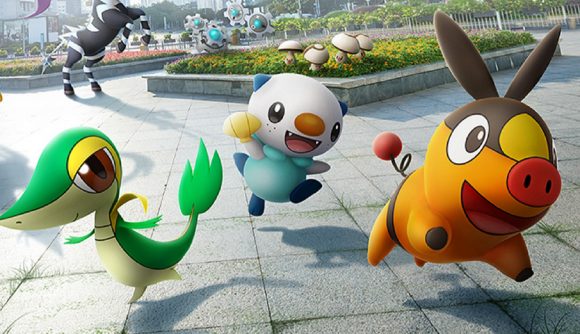 Niantic announced Pokémon GO’s Unova Celebration event will kick off the new year, featuring Pokémon first found in the region. However, the release of shiny Snivy has players wondering about the future of Community Days.

The Unova Celebration event starts on January 5 at 10:00 local time and continues until January 10 at 20:00. It’s the next in a series of events leading up to the Pokémon GO Tour: Kanto in February, which seem to be counting the generations backwards. Obviously wild spawns will focus on Pokémon originally found in Black & White, but the following Pokémon will appear more often: Snivy, Tepig, Oshawott, Lillipup, Herdier, Blitzle, Roggenrola, Drilbur, Scraggy, Tympole, Venipede, Trubbish, Gothita, Solosis, and Ferroseed. They’re not exactly the best Pokémon in Pokémon GO, but there are some gems in there.

Unova Pokémon will also be available in raids, including Genesect holding a Burn Drive which will change the typing of its exclusive move Techno Blast to fire-type. Unfortunately, shiny Genesect won’t be available, but if you want to do some fire-type damage, it may be worth dipping into a couple of raids.

However, as with many events, Niantic has released a new shiny that will be available for the first time. This event, it’s Snivy, the grass-type starter Pokémon. Now this is a huge break from tradition, as shiny versions of starter Pokémon are usually first released in a Community Day.

We’re assuming we’ll still get a Snivy Community Day next year – as the exclusive move hasn’t been announced for the Unova event – but it will be a repeated shiny by that time. Recent Community Days for Gastly, Magikarp, and Charmander already started the trend this year with all three having shinies already released, and Charmander getting its second Community Day. The next Pokémon to feature in a Community Day, Machop, is also already available as a shiny.

Fans are understandably disappointed that Community Days seem to be getting devalued by Niantic, as they used to be the pinnacle of Pokémon GO excitement, but recently, they seem to have the same feeling as watching constant Friends reruns: it’s just not the same any more.