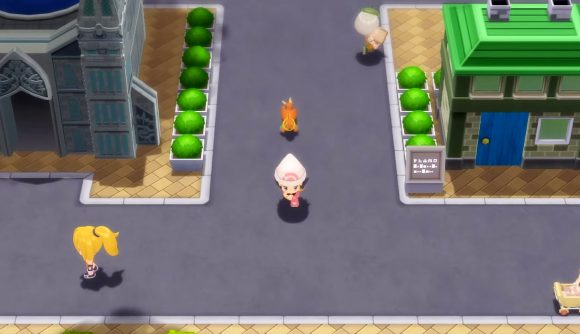 Today’s Pokémon Presents was an absolute treat. We finally got a Pokémon Unite mobile release date, a proper look at the stunning Legends: Arceus, and of course a whole lot of info on the upcoming Sinnoh remakes, Pokémon Brilliant Diamond and Shining Pearl. While much of the core gameplay remains true to the Nintendo DS games, there are a few new additions on the way.

The first new addition will allow players to let their favourite Pokémon follow them around – a mechanic first introduced all the way back in Pokémon Yellow, and one that has remained a fan-favourite over the years. In the original Diamond and Pearl games, only a limited number of Pokémon could follow the player, and only in Amity Square – Heart Gold and Soul Silver later expanded this functionality to every Pokémon throughout the entirety of the game later in Generation Four.

Pokémon Sword and Shield showcased the true potential of a dripped-out trainer, and outfit customisation is now coming to the Sinnoh remakes. So far, it looks like only set styles will be available, and it’s unclear if you’ll be able to mix and match.

The final major change in Brilliant Diamond and Shining Pearl relates to the Underground, which introduces new areas called Hideaways. Hideaways spawn different Pokémon, which change based on the Pokémon statues you have set up in your secret base. Additionally, some Pokémon can only be found in Hideaways – sounds like we’ll need to test out different statue combinations to catch ‘em all.

Going underground, showing off in contest shows, and walking around with your favorite Pokémon!

The Underground – including its fossil hunting minigame – is only one of many returning features to the Sinnoh remakes. Pokéball customisation is also making a comeback, though it looks to be greatly expanded on the seal system in the originals. Furthermore, Super Contests and the Union Room will also make an appearance.

With the Sinnoh remakes looking like faithful reproductions of the originals with a few new twists, we can’t wait to see how they play when the Pokémon Brilliant Diamond and Shining Pearl release date rolls round.