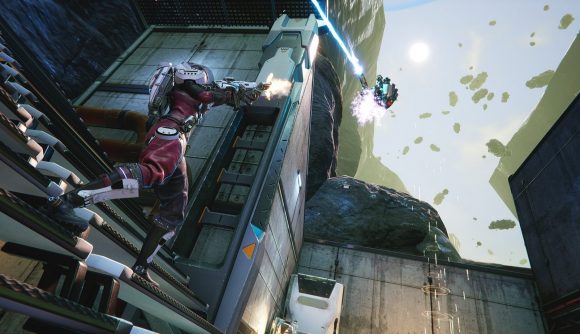 PC Gamer’s E3 presentation, the PC Gaming Show, was piled high with trailers, updates, and announcements for dozens of exciting games and developers. The showcase dipped into everything from indies, to highly-anticipated battle royales, to Lord Gaben himself dropping some cool Steam-themed news.

It was a big old stream, that’s for sure, so here’s a roundup of some of the highlights that we particularly loved.

First up was Naraka Bladepoint, a melee and movement-focused battle royale game. We got confirmation of the Naraka Bladepoint release date, which is slated for August 12, and news that another open beta is coming this week (running June 16-22). Naraka’s most recent beta on Steam was a huge hit, attracting over a million individual players and reaching a peak player count of over 140,000, and with the game being shown off at E3 a couple of times now, expect similarly large crowds for its June beta.

The battle royale has 60-player lobbies, and melee-focused combat is the order of the day here for its lineup of ability-based characters. There are some recognisable features borrowed from other battle royales – varying tiers of armour, similar to Apex Legends, and a contract-style system that wouldn’t look out of place in Call of Duty: Warzone – but it definitely has a unique style and feel to it.

Naraka Bladepoint will be PC-only at launch, but the devs have said that a console release could follow soon after.

Another intriguing competitive game that got our attention was Lemnis Gate, a mish-mash between an FPS and a turn-based strategy game. Wacky, right? The game has been known about for a while, but we got a Lemnis Gate release date and a quick interview with game director James Anderson.

In a nutshell, Lemnis Gate has you stuck in a time loop, where rounds last just 25 seconds. The quirk is that whatever you and your opponents do in that 25 seconds is replicated in the next round, so there are always more and more layers as the rounds progress.

Lemnis Gate is releasing on August 3 on PC, PS5, PS4, Xbox Series X|S, and Xbox One. It will also be coming to Xbox Game Pass on day one.

Finally, we weren’t sure exactly what to expect when PC Gamer said that Valve would be making an appearance at the PC Gaming Show, but we were blessed by the presence of Gabe Newell himself.

Sadly, no juicy news on some of favourite competitive titles like CS:GO or Dota 2, but there was the announcement of Steam Next Fest. This will run from June 16 to June 22 and allow Steam users to access demos of dozens of upcoming games for free. Titles include some E3 darlings like Sable, to Guinea Pig Parkour – gotta love indies, right?

Those were the standouts, but you can find a full list of all the showcase’s trailers here.