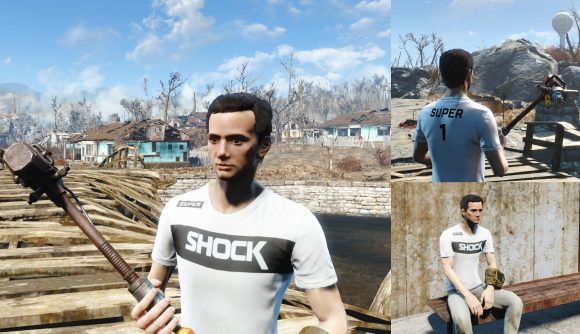 Fallout is the home of many things. From the Brotherhood of Steel to The Institute, there are people of all shapes and sizes in the irradiated world, so should it really surprise us Overwatch players are in the game now too? Yes, yes – it absolutely still surprises us.

It seems to Reddit user LawnFlamingo_ow thought it was a good idea to bring some of her love of the Overwatch League to Fallout 4, and so San Fransisco Shock’s Matthew ‘Super’ DeLisi is now in her game. The tank main has been added into the Fallout through the in-game character customisation but his shirt and trousers were made in LawnFlamingo_ow’s own game files – impressive.

And for her efforts, she was rewarded it turns out. LawnFlamingo received some Overwatch tokens to buy some sweet, sweet San Fransisco Shock themed skins (she picked Ashe and Genji if you were curious).

The Shock has also been posting the images of Super in Fallout to their social media, with many fans feeling quite conflicted. “I don’t know how to feel about this,” said Gomeyy on Twitter, while boba_weeaboo_boi on Instagram said, “We need one for Sinatraa”.

As far as we know, no one has added this to a modding site yet, but LawnFlamingo did seem to take an interest in putting it on one in the future. You might want to keep an eye on her Twitter in case she uploads it.