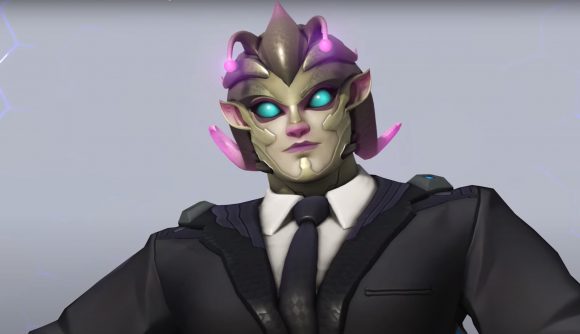 Jay ‘Sinatraa’ Won’s 2019 Overwatch League MVP skin has finally been revealed. Although the ex-San Fransisco Shock player has retired from competitive Overwatch, Blizzard still had to honour creating his special skin from being crowned the most valuable player of the 2019 season of Overwatch League.

Sintraa had a wide range of heroes he played but he came to be synonymous with being one of the best – if not the best – Zarya players on the circuit. As such this new skin for Zarya is really something special.

Reworked to look like an alien, this Zarya skin takes inspiration from films like Men in Black, and the real world FBI to look both dapper and out of this world. Her pink hair is replaced with some pink tentacles, she’s gained some bright blue pupil-less eyes, and don’t forget her new glowing antenna. The skin is undoubtedly brilliant, and we may go as far as to say it’s the best skin Zarya now has.

As previously mentioned though, you aren’t likely to see Sintraa playing Zarya any time soon – if at all. The ex-Overwatch pro made the decision to retire from the game earlier this year and announced he was moving to become a professional Valorant player for Sentinels instead.

The Alien skin will only be available from June 16th to June 30th 2020, so if you want it, you better grab it quick!

You can see a full break down of the new skin, Sinatraa’s reaction, and some cool commentary from the developers in the video above.