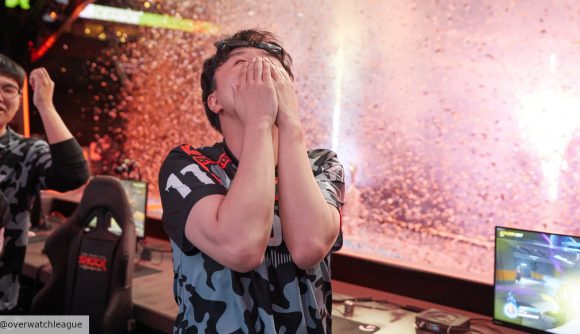 The San Francisco Shock put on a virtually faultless display at the Overwatch League Season 2 Finals, sweeping the Vancouver Titans 4-0 in Philadelphia.

The Shock, who made history by not dropping a single map in their loser bracket run to the final, continued their dominant form when it mattered most. Not only were the team crowned champions, they also walked away with $1.1 million between them and will go down in history for their sublime journey to the final.

The Shock’s South Korean Tank Hyo-bin ‘ChoiHyoBin’ Choi was voted as MVP but it was DPS player Minho ‘Architect’ Park who delivered one of the most memorable moments of the final, with a 1000 IQ play using Bastion that got the whole crowd on their feet. During map two, which was Hybrid on Eichenwalde, Architect boosted himself atop a hanging chandelier on the last section of the map, giving him a perfect vantage point above the payload and picking up two crucial eliminations to the delight of the spectators.

Despite the massive support inside the arena, viewing figures for the final were considerably lower than the inaugural Overwatch League season last year. The playoffs in 2018 peaked at over a million viewers, however Season Two managed just over 300,000 peak viewers, according to data from escharts.com.

This dip in viewership will be a big concern for Blizzard, especially as another top-tier esport, CS:GO, managed to draw in over 100,000 more viewers at its peak on the same day as the finals with its coverage of ESL One New York. This could potentially show that big name esports brands are still more attractive to the competitive gaming audience than the city franchises in the Overwatch League.

Whatever direction Overwatch decides to go in the future with its esports scene, the Shock has cemented their name in the game’s history for their remarkable winning ways in the build up to being crowned Season Two champions.