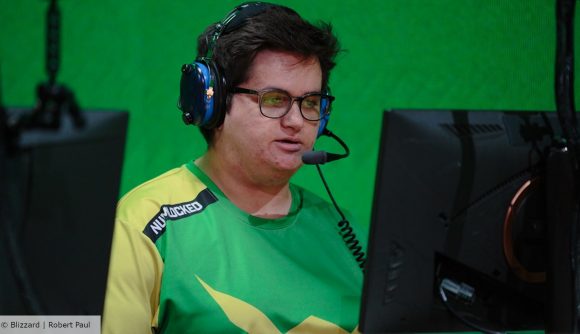 Just hours after being released by his Overwatch Contenders team last night, Seb ‘Numlocked’ Barton said he’s worried about the competitive future of Blizzard’s hero shooter given the amount of roster releases in the last few weeks. The main tank still loves the game, but he’s being forced to look at other avenues because “everyone wants out” of the esports scene.

The Brit was released from Montreal Rebellion alongside his other teammates last night, and even though the Contenders team didn’t release a statement, Numlocked says it was because the organisation was “fighting costs” due to the ongoing coronavirus pandemic. Because the announcement was sudden, the pro player jumped onto Twitch to answer questions, but it was clear he was quite down about it all.

“What’s going on in general? Everyone wants out,” Numlocked tells his chat. “Nobody is happy with what Blizzard is doing, COVID is putting extra strain on everything, people want to get out of Overwatch League.  Obviously people are pulling out of Contenders. Like Montreal Rebellion wasn’t the first and it definitely won’t be the last. Unless there are big changes, it’s only going to get worse from here for Overwatch.”

In recent weeks, a number of Overwatch pros have announced their retirement from the game, like Kevin ‘TviQ’ Lindstrom and Damien ‘HyP’ Souville. But Numlocked doesn’t want to go that way.

“The thing that upsets me the most is all these players quitting, most of them doing it are because they’ve just fallen out of love with Overwatch,” he continues. “The worst thing is that I still genuinely love this game. I have so much fun playing this game and it’s my favourite game I’ve competed in. But there’s nothing left for me anymore.”

The Brit says he’s received multiple offers from tier two teams to carry on playing, but he doesn’t want to play competitively without pay. He also says he’s looked into coaching, but there won’t be many opportunities to do that at the moment.

However, despite feeling down on stream, Numlocked is looking to the future. The Overwatch pro says he’s looking to “hard stream” Valorant for the next few days and see what happens.

As a gamer who’s mastered and competed in three different games so far, a future in Valorant might not be as ridiculous as it sounds.