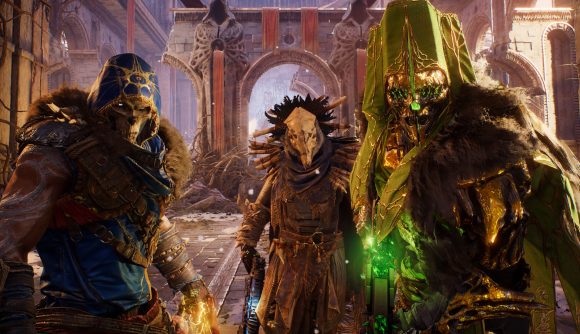 Outriders was first released last year, but now new content is coming in the form of Worldslayer, which is the latest expansion to come to the co-op looter-shooter. With Worldslayer releasing globally, those pesky time zones have reared their ugly heads again to annoy you, so we’ve worked out when you can play the expansion in your local time.

Outriders Worldslayer will be available to early access players who preordered the expansion on June 28, 9:00 am PDT/12:00 pm EDT/5:00 pm BST. The game will then be available to everyone on June 30 at the same times above. If you’re still confused, this Square Enix countdown clock will show you exactly how long is left until launch.

Those looking forward to getting hands-on with new content when Outriders Worldslayer releases have a lot to look forward to. The expansion adds a brand-new standalone campaign that can be played by anyone, not just veterans, which means it’s a great place for new players to jump in.

As well as a new campaign, Worldslayer is adding new gear, weapons, enemies, class trees, and systems. One of these systems is called Ascension and it measures your long-term progress alongside regular play; it will take hundreds of hours to fully complete. The Apocalypse System replaces challenge tiers and affects how you earn loot, difficulty, and max gear level.

Everything you need to know about the #Worldslayer launch is right here….

There’s no doubt Worldslayer expansion is set to be a substantial one, as the expansion update brings big changes to all players and not just those who purchase the latest DLC. Among the most notable adjustments are combat difficulty balancing to stop unnecessary difficulty spikes, changes to weapons and how they behave, as well as tweaking character builds and how events trigger in-game.