At TwitchCon 2016, Amazon Game Studios boldly revealed its first three titles to the world. Nobody knew what videogames developed by one of the biggest tech companies in existence would look like, and for a time it seemed that we would never experience the fruits of the studio’s labour.

Team-based multiplayer brawler Breakaway was axed in 2018, while third-person shooter Crucible was Thanos-snapped in late 2020, leaving only New World – by far the most ambitious project of the trio – from the original lineup. With all hands now on deck to polish Amazon’s bold new MMO, all eggs were in the New World basket – and they needed to be.

After an initial preview build went live in August 2020, players flocked to see what all the fuss was about. As game director Scot Lane tells The Loadout, the studio was confident that people would be drawn to the experience of gunpowder-meets-magic, but he didn’t expect the sneak peek to be as popular as it was. “We first truly realised we were on to something during the preview event in 2020,” Lane says. “The response from the players blew us away!”

However, New World’s first outing came with a slew of constructive feedback from players, prompting the studio to revamp whole swathes of the game from the bottom up. For the best part of the next 12 months, Lane and the other developers would rework PvP, add whole new PvE activities in the form of Excavations, rebalance its combat system, and really flesh out the island of Aeternum. 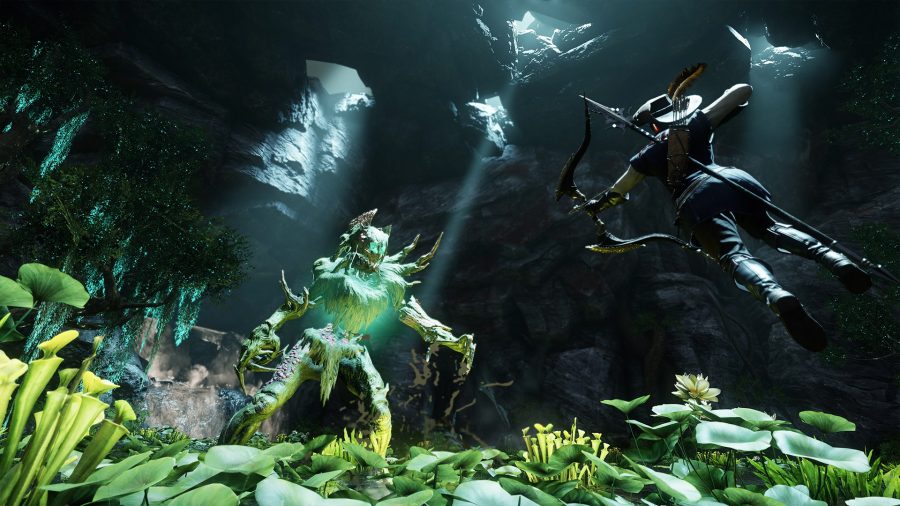 When players were finally reintroduced to New World during its July 2021 beta, the feedback – barring grumblings over servers being overloaded – was incredibly positive; the extra time taken to iterate based on player feedback had paid off. All the more impressive is the fact that the studio managed to achieve such a huge turnaround despite work from home mandates being in effect – something Lane believes has made communication more of a challenge.

Working from home makes everything harder

“Working from home makes everything harder,” Lane says, “and there is a higher likelihood of error because you miss out on information sharing gained from proximity by overhearing conversations. It’s also harder to ask a question. At work, you can simply lean over or walk up to someone which has very little friction. Now to have a conversation you have to send someone a message and drive it.”

However, Lane also believes that operating from home has been a gift as well as a curse. “There are also benefits,” he explains, “as implementers can get into long periods of deep focus which isn’t always possible in an office setting.” Having successfully navigated the challenges facing studios affected by the pandemic, New World was well on course to be one of 2021’s biggest game releases.

When launch day finally rolled round, anticipation was in the air. Despite the work put in by the devs, New World was met with middling reviews across the board. Our friends at PCGamesN gave it a 6/10, stating that its “stellar crafting experience and surprisingly slick combat aren’t enough to compensate for the flaws in its humdrum and frustrating quest design.”

Yet this didn’t deter an incredibly-eager horde of players which harboured plenty of MMO veterans, including jaded World of Warcraft players like Twitch superstar ‘Asmongold’. Twitch Tracker registered a peak of nearly one million viewers tuning in on the streaming platform when the floodgates opened on September 28, heralding in adventurers in their droves – or at least those who were able to squeeze under the server cap. 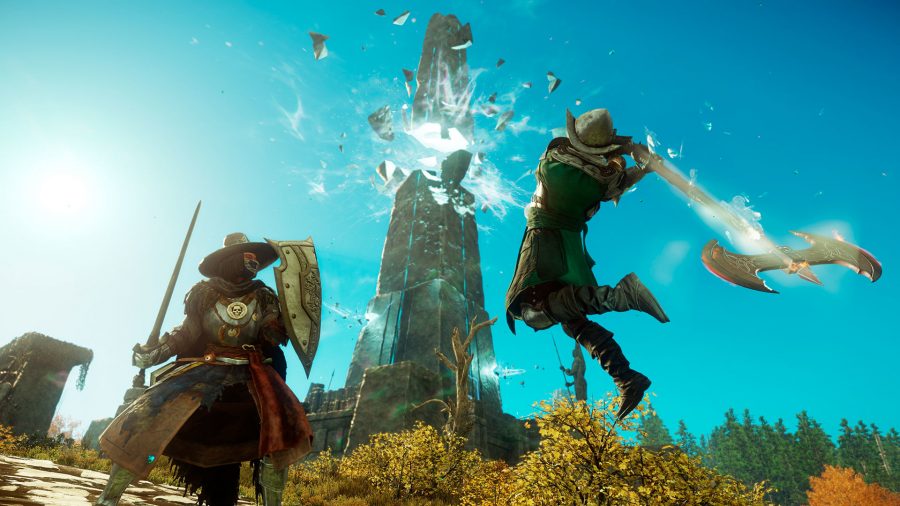 According to Lane, what was an incredible launch day “quickly turned into anxiety” as players and content creators began to complain about the long queue times. “We had to literally double the number of active worlds to handle the initial onboarding rush,” he says. “Fortunately, being a part of Amazon and using AWS (the company’s cloud-based web services), we had the ability to quickly scale up our worlds.”

Server capacity wasn’t the only issue the team faced, as some players who did manage to get in quickly encountered other issues. Trying to sift through this compendium of problems, Lane explains, was a major pain point for the devs. “When you get so many players it is really hard to read signals through all of the noise,” he says, “which made it hard to understand what issues were hitting a large number of players, versus those impacting fewer players.”

As the studio had opened up so many new servers to facilitate its overwhelming launch, some players found themselves on different ones to their friends and loved ones. Initially, the plan was to roll out server transfer functionality in mid-October, though this process inadvertently introduced a way to duplicate gold on certain characters, leading to transfers being temporarily disabled.

For Lane and the rest of the team this would not be an isolated incident, as more and more ways to game New World’s economy were either accidentally introduced through patches, or discovered by players eager to cheat the system during its first couple of months. Reflecting on the situation, Lane says the experience of discovering someone had found yet another exploit was “gut-wrenching – it literally hurt.” As he goes on to explain, issues of this magnitude have no quick fixes, either.

“First and foremost we have to stop the bleeding by turning off whatever is causing the issue,” Lane states. “Then we root cause the issue and make sure we have a fix. Then once we implement the fix, we painstakingly go through all of the telemetry and remove all of the exploited items, and either suspend or ban the cheaters (depending on the level of their infraction).” 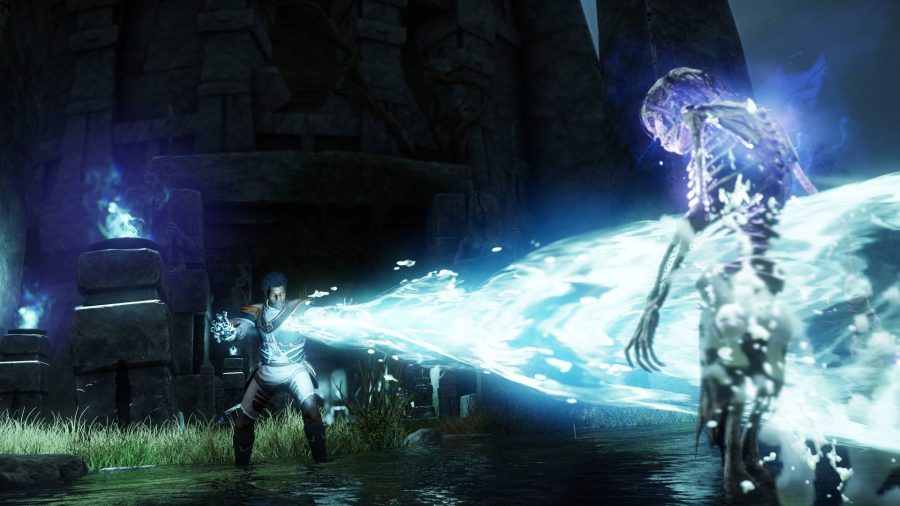 The knock-on from this is that resources are directed away from implementing other improvements to the live experience. After a few rounds of exterminating exploits, Lane was left feeling like the studio was driving through the Rocky Mountains. “At some point you keep wondering if the next mountain will be the last,” he says.

With New World’s most perilous peaks seemingly behind it for now, Lane stresses the immense amount of work the team has piled into correcting the post-launch experience. “The team really wants to give players the best experience possible and when these issues happen, they are taken very seriously,” he says. “Sometimes it may not seem fast from the players’ perspective, and this is because some of the problems are very difficult to understand and then fix. Never is the reason a lack of effort and determination from the team.”

Throughout the interview, Lane’s admiration for his colleagues rings clearly. As much as they are troubleshooters and bug-hunters, the minds behind New World are, in his words, “player-obsessed” – a trait which he places a great deal of importance on when it comes to the drastic improvements which have consistently been made by them since the summer of last year. “We would not be where we are without our team’s willingness to engage and listen to the players,” he remarks.

Although New World’s first few months of life in the wild have been fraught with various obstacles, it has also presented some truly golden moments. “One of the things I love about this big sandbox is that players will create funny ways to play and create great content that we’d never imagined possible,” Lane says.

Even during the beta, when the streamer-led Battle for New World event was taking place, Lane fondly recalls groups of low level players either ambushing their high-level counterparts or straight up zerging them down, alongside creative ways players have led botters to their watery graves by manipulating their pathing so they’d drown.

New World’s devs have also tried to get creative in the ways they delight their community. For Thanksgiving this year they answered the question ‘what would happen if turkeys were actually gigantic, could shoot lasers from their eyes, and could beat the stuffing out of you with giant explosive eggs?’ by adding the monstrous Turkulon world boss to the game. To Lane, watching players work together to tackle the terrifying turkey was undoubtedly one of his favourite moments from this year. 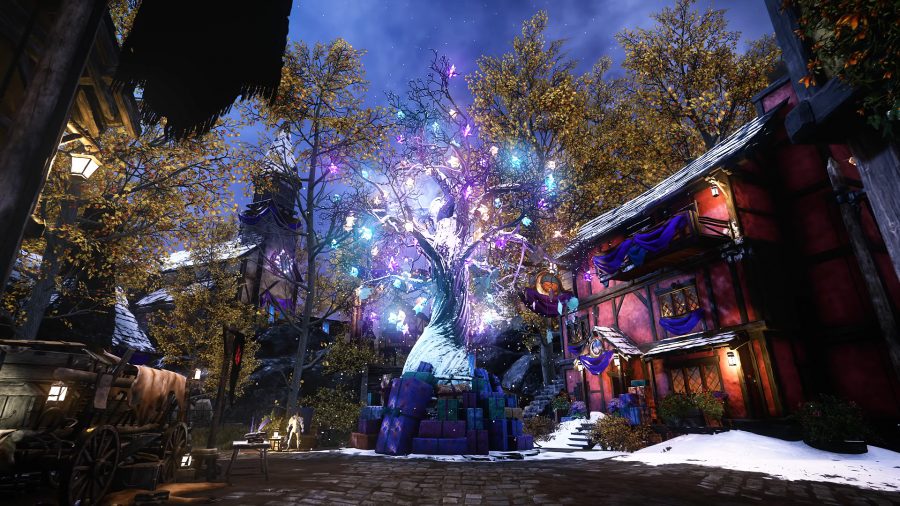 But it isn’t just gobbling gimmicks which the team has been hard at work implementing since launch. Led by player feedback, Lane notes the addition of “more directed and soloable content” for those looking to grind away on their own. Features like being able to view and manage the inventory while on the run have also been added to New World’s roadmap at the players’ behest.

Of all of New World’s post-launch additions, Lane has a particular love for the Gleamite meteors, which can be harvested as part of the ongoing Winter Convergence Festival to spread joy and goodwill to all. “I think they are fun because they are rare and demonstrate how dynamic the world can be,” Lane explains, “[It’s] super exciting when you hear and see them falling out of the sky.”

This dynamism is something which Lane wants to inject more of into Aeternum going forward, and says the team is looking into ways to “implement similar mechanics” in the future. “I really like the world being different when you revisit areas,” he says. “There’s always the potential to see something you haven’t seen before.”

While New World’s initial burst of activity appears to have settled, roughly 100,000 players are still logging on each day on Steam. The numbers may have dwindled since launch, but Lane remains squarely focused on improving the player experience over the metrics.

For 2022, Lane tells us that, alongside making New World more dynamic, the team wants to imbue it with a greater variety of content, AI, and quests, “so that players can get lost in the world.” The game may have had a tumultuous start, but over the past year-and-a-half Amazon Games has clearly showcased that it is trying to put its players first – even if things have been rough-going at times.

Lane leaves us with his personal resolution for the new year of New World: “If at this time next year players are saying ‘wow, they really did listen to us and work with us’, then we will have had a great year,” he says, “because once we went live, New World went from an Amazon Games game to being the players’ game.”