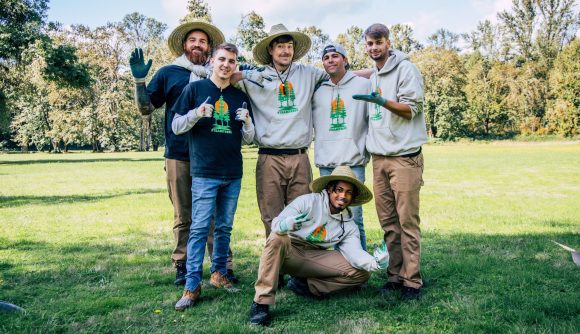 We only have one planet and YouTuber Jimmy ‘MrBeast’ Donaldson’s attempts to make it a better place to live has been boosted by none other than Jack Dorsey and Elon Musk. The CEO of Twitter and the CEO of Tesla have both donated significant sums of money to help the YouTuber plant 20 million trees by the start of next year.

MrBeast unveiled his ambitious #TeamTrees campaign on October 25 to celebrate hitting 25 million subscribers on YouTube. The American has called the campaign the “largest YouTube collaboration” of all time, partnering with a number of content creators and the Arbor Day Foundation to see it through to completion, with every dollar donated leading to one tree planted.

And less than a week after launching the campaign, MrBeast has raised enough to plant eight million trees. Musk, who has since renamed himself Treelon on Twitter, donated $1,000,000, while Dorsey donated $150,000. They now sit at the top of the Most Trees leaderboard.

In his launch video, the YouTuber admits that he’s not been the most environmentally friendly person over the last couple of years, but that he wants to stand up against retweet activism and do something to help. To get the campaign off to a good start, MrBeast and other content creators, such as Mark Rover, teamed up with fans to plant 1,700 trees in Oregon in just two days.

“A lot of you might be of the mindset of the old me that was basically you know, someone else will figure it out but that’s not how it works,” he says. “We genuinely need all the help we can get.

Honestly I’ve done everything I can possibly can. I’ve got a bunch of fans together and we planted thousands of trees. Me and Mark have invested months of time behind the scenes into getting this all together, and I’m personally planting 100,000 trees, aka $100,000.

“Now it’s your turn. We only have one earth and it’s important we look after it. Recently lots of not so great things have been happening to forests and lots of people just keep making fun of our generation for retweet activism and not actually doing something.”

And while MrBeast is aware that 20 million trees aren’t going to fix the underlying cause of climate change, he wants to use his platform to inspire positive change for everyone. And with the trees being planted on every continent except Antarctica, the YouTuber’s campaign really is a force for good.