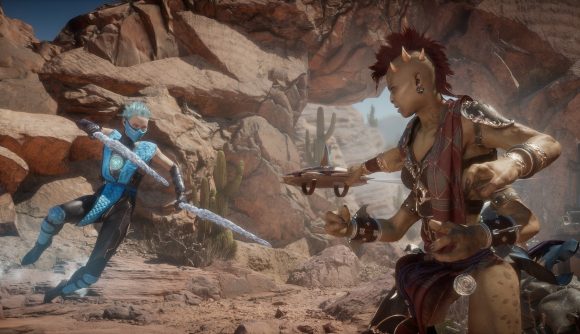 A player has been disqualified from the Mortal Kombat 11 Pro Competition after criticising the game’s developers, NetherRealm Studios. ‘Titaniumtigerzz’ was competing for a place in the loser’s semi-final when he was disqualified mid-match.

Titaniumtigerzz’ variation of Sheeva – which allows the character’s moves and name to be customised – was named ‘WhyDidNRSdoThis’. Although the player insists it was a light-hearted joke, casters and viewers were visibly confused when the live feed of the fight cut away. “Unfortunately, it looks like we have a little problem here, and someone is being – we got a situation,” caster Miguel ‘Darth Arma’ Perez says after the untimely stoppage. “I don’t know what we can publicly say but we definitely have a situation here.”

Viewers were later informed that Titaniumtigerzz had been disqualified from the tournament, and his opponent ‘Krispifungus’ would be advancing. Many viewers of the stream appear to have been banned for asking about the disqualification, as no reason was given at the time.

Subsequently, Mortal Kombat fans have been using the hashtag #WhyDidNRSdoThis on Twitter to complain about the disqualification.

“It was meant to be funny since the character I was using is basically extremely easy,” Titaniumtigerzz told Kotaku. “The joke was, ‘Why would they make such an easy character?’” He also said that he would have “changed [the name] instantly if I’d been given the option.”

Mortal Kombat pros have been vocal about how overpowered Sheeva’s Dragon Drop stomp move is – as it is unblockable and can be used in almost any situation to gain an advantage.

It is unclear which rules were actually broken, however it could be an interpretation of the rule disallowing nicknames which “are nonsense”.