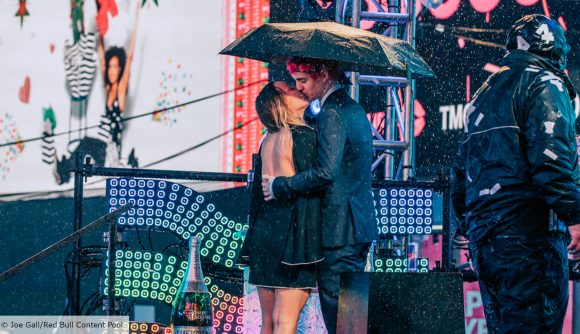 Those on Mixer describe their community as family. They stick together no matter how big or small their platforms are and that’s really been shown in the last 24 hours. After Microsoft made the shock announcement that it was going to shut Mixer down next month, streamers felt isolated, panicked, and alone. To counter that, Tyler ‘Ninja’ Blevins, who regularly celebrates the platform’s inclusiveness, joined forces with his wife, Jessica, to share some love on the platform.

The pair donated thousands of dollars to distraught Mixer streamers hours after the announcement – something they’ll continue to do until the platform closes down on July 22. Ninja started with a $500 donation to VinnyB, and as the tears started to flow, he donated another $1,500. Jessica, meanwhile, donated $200 to Mixer partner s0apys, who also couldn’t believe what she was seeing.

The pair stopped by a number of other streams throughout the day to share their love and support to those having a hard time.

Mixer isn’t leaving its streamers out in the cold though. Microsoft is teaming up with Facebook Gaming to offer them a home, with reports suggesting Mixer partners will receive partnership status and $2,500 for moving over to Mark Zuckerberg’s platform, but many are concerned about the hoops they have to jump through to get there, plus the platform’s viewership figures.

I’ve never cried on stream until today 😭.. @JessicaBlevins @Ninja THANK YOU! THANK YOU for believing in us content creators! 💟🙏

no words 😢.. oh and peeep the hoodie 👀 pic.twitter.com/McFh5JEJ9V

I put in 40-60h a week into streaming, while studying and working part-time and I just found out most of it is just wiped out, I’m devestated.

Thanks for making so many smile anyway today @JessicaBlevins .

You & your husband are some of the most generous, genuine people. pic.twitter.com/h0woy2VEa2

According to Streamlab’s April report, Mixer had more active streamers than Facebook Gaming and YouTube Gaming combined and had the second most hours streamed that quarter, behind Twitch. Facebook is hitting year on year growth, but those numbers aren’t enticing enough for most of the streamers left without a home.

Ninja and Michael ‘shroud’ Grzesiek were reportedly offered double their Mixer contracts to move over to the platform, but both have apparently declined. This means the future of two of the world’s biggest streamers is up in the air, so watch this space to see where they’ll both end up.