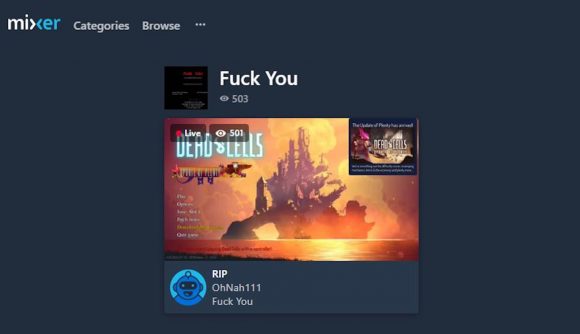 If you’ve had a cursory glance at Mixer today, you’ll have spotted the big banner advertisement telling people to head over to Facebook Gaming and the countless sad streams from creators bidding their final farewell to the platform. Well, not everyone is happy about the platform’s closure because streamers are broadcasting to a category named simply ‘Fuck You’.

The category, which is usually reserved for a 2004 indie game of the same name made by Tarn and Zach Adams, the creators of the Dwarf Fortress, is currently being used for two broadcasts in an effort to give Microsoft and its dying platform the finger one last time before it closes.

The first is a stream by OhNah111, which hundreds of people are using to drop the remainder of their embers while posting new links to their new streaming platform channels. OhNah111 has left the screen on the menu of Dead Cells and it’s not even clear if they are even sitting at their desk, so who knows what’s going on there.

The second by Bossome, which has now gone offline, was slightly more sinister. Titled ‘Mixer’s turn to die!’ the stream featured a custom graphic of Mixer meeting its untimely death to a rabble of loud music. It didn’t attract too much attention compared to other streams, but like the previous one, viewers were making use of it to try and nab some followers for new accounts elsewhere.

These seem to be the only channels making use of the category, but it’s clear the mood is quite sombre on the platform. It is, after all, Mixer’s final day on the internet and Microsoft hasn’t uttered a word since it condemned the platform last month.