A report into the streaming market has thrown up some huge surprises for the third quarter of 2019, with Twitch still the dominant platform despite losing Tyler ‘Ninja’ Blevins to Mixer.

At the end of Q3 it’s thought that Twitch has just over three quarters of control in the market, amassing 75.6% of the total hours watched on streaming platforms. The report, which was produced by StreamElements and Arsenal.gg, also shows that YouTube’s streaming service is second with 17.6%, while Facebook and Mixer both have less than 4% of the market each.

It was thought that Ninja’s move to Microsoft’s streaming platform would help close the gap to Twitch, but this report suggests otherwise. In this case, the gap has in fact widened, and Mixer now has a smaller share compared to the likes of Facebook Gaming. Facebook was in fact the only platform that hasn’t seen a decrease in the total amount of hours watched from August to September, where most usually see a drop off due to the end of the holidays, which sees a lot of the key demographic return to school.

Despite Ninja personally having relative success on Mixer – accruing over 2.3 million followers already – it appears the move hasn’t done enough to draw audiences other than his own over to the platform. 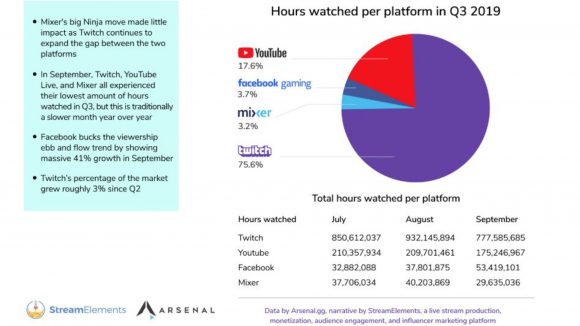 Whether Mixer can bring in more viewers in the final quarter of the year remains to be seen, but the fact that Facebook is pulling in a similar amount of hours viewed without the world’s most famous streamer on board will be of real concern.

Twitch meanwhile will be happy that its cut of the market has remained so high in Q3, with August raking in over 900 million hours watched.

The ‘hours watched’ metric has had questions raised about its accuracy and usefulness in the past, and recently big esports companies such as Riot and ESL have turned to different ways to measure audiences that are of the same standard as television and sports broadcasts.