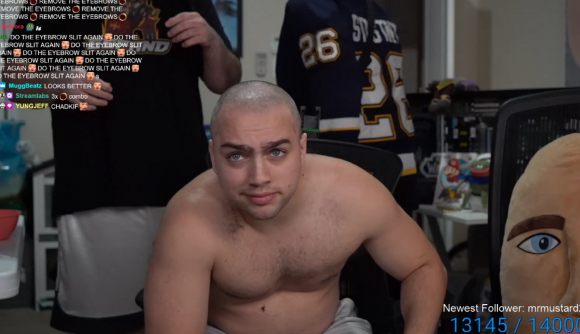 Popular streamer Matthew ‘Mizkif’ Rinaudo is up to his old tricks again and has shaved his head as a self-imposed forfeit for failing to complete a Minecraft speedrun. Despite completing a Mario 64 speedrun earlier in the week, it seems Mizkif was setting himself up to fail by announcing another challenge, this time to complete the Minecraft campaign in one hour.

The newly-bald streamer soon altered the time limit to a more achievable five hours, but it still wasn’t enough. The final straw came as his character drowned about three-quarters of the way through a run. He felt that that run was the best he could hope to achieve, and threw in the towel.

His housemate Ryan ‘Simply’ Reeves dutifully did the honours and prepared the hair clippers. As is customary for any livestreamed forfeit, the chat decided how short Mizkif’s hair would be clipped. They obviously opted for the shortest possible trim, so the streamer will be rocking a skinhead for the foreseeable.

We don’t know what he was worried about, as Mizkif joins the ranks of some amazing hairless hunks. Jason Statham, Dwayne ‘The Rock’ Johnson, and even Mr Worldwide himself have made their bald bonces their own.

Mizkif’s new hairdo doesn’t actually look that bad, but then again, his hair was pretty short to begin with. However now that his hair is gone, he’ll have to think of some new, more extreme, forfeits if he tries any more speedrun challenges in the future.