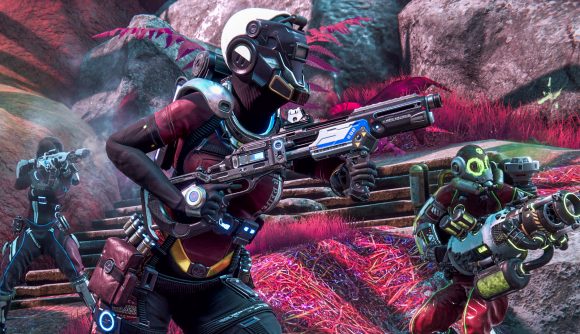 2021-09-30 11:45 Editor's note: Ratloop Games Canada hasn't officially commented on cross-play, but it appears the game does have this feature at launch. We've corrected the article below to make that clear to players.

Lemnis Gate finally released yesterday after a delay earlier in the summer and players with Game Pass and on PlayStation and PC have been getting stuck into its unique blend of time-loop, turn-based FPS action. Or, at least they have been trying to – the game’s servers have suffered serious matchmaking issues, leading to queue times of over an hour for some players.

One quick look through the Lemnis Gate subreddit turns up a number of posts from the last few days complaining about the long queue times for casual play. Although the queue for ranked play actually appears to be working as normal and you can join your friends to play against them.

Some players, such as user 'TombstonesLittleButt' on Reddit have also reported disconnection errors while playing with their friends via the game's join code system.

Ratloop Games Canada has acknowledged the issues over on its Twitter account, noting it is continuing to look into what might be causing the problems. The team has also provided The Loadout with a statement on the ongoing issues:

“We are aware that some players have been encountering issues with matchmaking, join codes and longer than usual wait times. The team have been hard at work to improve the situation and have made some adjustments to help address this. From now you should begin to see improvements with matchmaking and join codes, as well as reduced waiting times. We will be continuing to investigate the situation so please do let us know via our issue tracker if you are encountering any further difficulties. Thank you so much for your continued support and patience.”

Hey! We're having some matchmaking issues at the moment so that might be impacting you 🙁 We're looking into it though and will of course share when we have updates!

There are also concerns over just how big the Lemnis Gate player base actually is, despite the game launching on the Xbox Game Pass as part of the September 2021 line-up. While we don’t know the player stats for console, SteamDB notes that the game’s all-time peak on Steam reached 807 players at launch and has significantly dropped since then.

These issues have been persistent ever since the game launched on Tuesday, despite the game having cross-play implementation across all platforms. As of today, matchmaking is becoming more stable and players are now able to get stuck into Lemnis Gate’s unique turn-based PvP action. Hopefully, things stay stable from here on out.