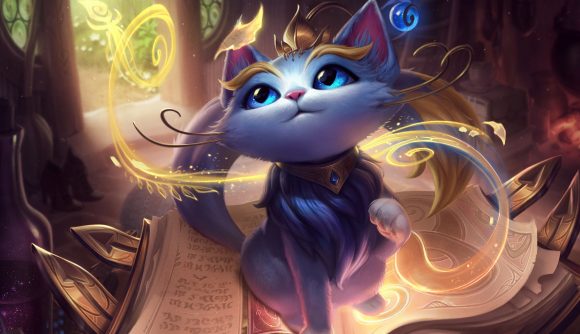 Yuumi is arguably one of the best and most accessible League of Legends champions out there, prompting many to call on Riot Games to delete her altogether. However, after finally assessing the damage, Riot Games admits The Magical Cat is just a tad overpowered and she’s going to be subject to a few balancing changes.

In a big old blog post explaining Yuumi’s future, Riot Games says “we agree that Yuumi hasn’t been fair to play against” but that doesn’t mean she “shouldn’t exist.” Her counterplay is the biggest problem when it comes to balancing, and excluding the most recent changes, she’s not really been in a healthy place compared to other champions.

So to get her back to where she needs to be, Riot Games is proposing players to “get more creative.” The most recent changes to her healing mana costs should force Yuumi players to utilise her passive more in order to be effective, so she’ll have to go it alone and interact with opponents.

“In order for Yuumi to be a healthy champion in League, she has to give opponents opportunities to interact with her,” the blog continues. “Changing her heal cost to be a percent of max mana will give us a tuning lever that bypasses items and runes and allows us to force her to utilize her passive regularly – which is always what we intended, but she’s thus far found ways to avoid.

“We hope that by forcing Yuumi to open that counterplay window throughout the game in order to be effective, it’ll make her feel more fair (and less frustrating) to play against.”

So there you have it, Riot isn’t going to delete Yuumi from the game no matter how much you hate her.