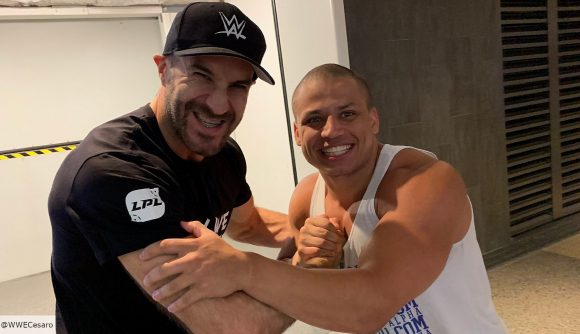 He’s one of the stars of WWE wrestling and very soon League of Legends fans may have to face him in battle.

Don’t worry, it isn’t in the ring. But you may soon bump into pro wrestler Claudio ‘Cesaro’ Castagnoli in Summoner’s Rift if you’re jumping into some solo queue. That’s because Cesaro has just hit Silver 3 in ranked League of Legends, and attributes his climb up the rankings to another name familiar in sporting circles, ex-basketball pro and former Echo Fox owner Rick Fox.

Despite standing at 6 foot 5 inches and making a living from pulverising people in the ring, it seems that Cesaro has found himself hooked on playing competitive LoL in his spare time. He tweeted out his achievement of hitting Silver 3 and says that his climb up the rankings in 2020 has “started out quite well, let’s hope I can keep the momentum,” while also thanking Fox for inspiring him. Fox has previously stated that he “enjoys the climb” of ranked LoL and that it has helped him “relax” during the stressful period of leaving Echo Fox.

Inspired by @RickFox, #TheClimb2020 started out quite well, let’s hope I can keep the momentum pic.twitter.com/bE4VAIlp3B

According to Cesaro’s OP.gg page which tracks his competitive record, he currently has a lifetime win ratio of 47%. His preferred role is as a top laner, and has been having plenty of success with Nasus in the current preseason, with an impressive 11 wins from 12 games. His most played champion in preseason, however, is Sion.

Cesaro has been a fan of League of Legends for some time and shared photos of him at the LCS Finals back in August 2019 alongside the likes of streamer Tyler ‘Tyler1’ Steinkamp and behind the casting desk.

So next time you got to flame your top laner in ranked, it might be worth checking their Summoner Name. You know, just in case…