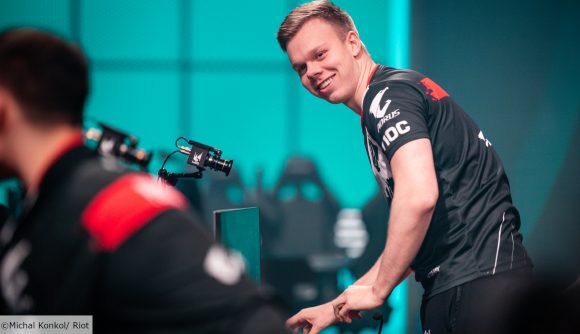 Top lane has been somewhat reimagined in competitive League of Legends so far this year, with a number of unsuspecting heroes being picked outside of their usual roles as supports and getting good results.

The latest to get a run in top lane in the esports scene was showcased in last weekend’s clash between LEC heavyweights G2 and Fnatic, which saw G2 take the victory and jump to the top of the standings. But it was the pick of the Worlds finalist’s top laner Martin ‘Wunder’ Hansen that fans were interested in after he locked in Janna. Despite not registering any kills, he picked up nine assists and only died once playing the support champion.

In a post match interview following G2’s victory, Wunder explained his unusual champion choice. The Dane says that he picked her more as a counter to Fnatic’s top lane pick of Sett, but also that he was inspired to try Janna out after seeing her win rate on Reddit.

“It really was just a pick into Sett, it wasn’t really comp-dependent,” Wunder says. “It’s the last time we can play stuff like this top lane after the nerfs, so I had to do it for the last time.”

“I think I saw on Reddit or something that Janna had a 56% win rate and I was like ‘okay sure, I’ll try it,’ and it made sense into Sett. I’ve never really played it before so I guess it doesn’t really take much skill? Either that or I’m just a support main at heart.”

The trend of top laners utilising support champs has seen the likes of Sona and Soraka wreak havoc both in the competitive League of Legends scene and in ranked play, landing them significant nerfs in an attempt to make them less viable.

Thanks to the win against Fnatic, G2 is now top of the LEC with an 11-3 record, but has the likes of Fnatic and Misfits breathing down its neck with four games still to play in the group stage of the Spring Split.