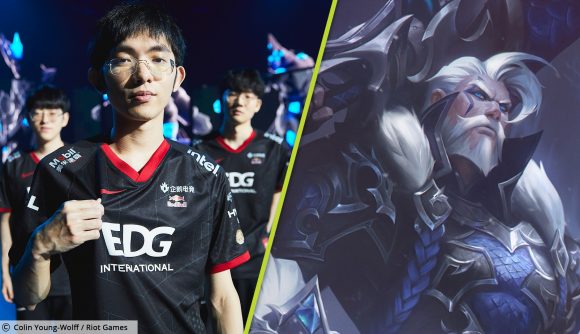 League of Legends’ Worlds skins are always a hot topic, and this year’s are no exception. Worlds 2021 winner EDward Gaming has the privilege of having its players’ achievements cast in code, and from the splash art released by Riot Games so far, they look spectacular. Now, the developer has gone even further and revealed the skins in-game through its Public Beta Environment (PBE).

EDward Gaming’s players originally hinted at which champions they wanted to be immortalised as during the post-Worlds 2021 Grand Final press conference, and it certainly looks like they all got their wish.

The most adorable part of the skin-creation process comes in the form of Yuumi’s Worlds skin being modelled after Meiko’s cat, Raccoon. According to skin producer ‘Riot Tiny Bun’, the support specifically requested his feline friend be immortalised in-game. As you’ll see in her recall animation below, Yuumi gets picked up and petted by spectral hands, which is – we regret to admit as this is Yuumi we’re talking about here – cute as hell.

With the Worlds skins debuting on the PBE, it’ll only be a matter of time before they hit the live server. DWG KIA’s 2020 Worlds skins dropped on April 29 last year, so it’s likely that EDward Gaming’s skins will arrive sometime around or during MSI 2022.