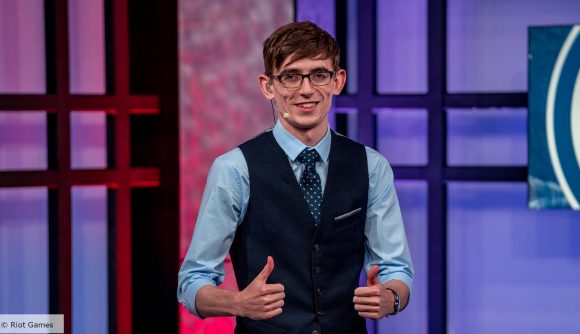 For Andy ‘Vedius’ Day, being invited to work on the League of Legends World Championship finals is a ‘pinch me’ moment. The Welshman, who has been playing the game since its inception ten years ago, has only really been working as a caster in the European scene for a few years.

Helped by his stellar performances on tournaments such as the ESL UK Premiership, Vedius was later hired by Riot Games to appear on the League of Legends European Championship broadcasts. His in depth analysis is respected widely around the world, but he’s not just proud of his journey, he’s proud of League of Legends’ journey too.

“I still think League is a big kid in many ways,” the Welshman tells The Loadout in Paris. “It’s been incredible to be a part of it though. I only really became a caster three or four years ago, so I’m relatively new, but to have an opportunity to be a part of what it has become is pretty amazing.”

The caster has become a staunch advocate of European talent in League of Legends, even backing G2 to go all the way at Worlds. Even though the team fell short in the final against FPX, Vedius is content with what G2 has showcased this year, but admits other teams need to step up to G2’s level.

“Depending on how the game evolves next year, I think everyone needs to step up their game,” Vedius says. “I think this tournament has shown that roaming around the map and being able to influence more than just one lane is the best way to play – and that’s the reason why the two best teams in the world are in the finals.

“I think [G2’s final appearance] showcases to European finals that we have the potential to be the best, which is really cool and really inspirational, but the problem at the moment is that there is a very large gap between G2 and everyone else [in the LEC]. That gap does not exist in China or Korea, which means there are a lot of domestic teams fighting for those top spots. And until more teams catch up, the other regions will still beat us.”

And as the off-season begins, and whispers of roster shuffles begin to leak, we might well see some big changes in the European scene as teams try to work out what G2’s achilles heel could be. Vedius however, isn’t sure they’ll be able to find one.

“I think G2 will continue to dominate in the LEC,” he says. “I think Europe struggled a bit this year because a lot of the players took a gamble with their rosters and ended up collapsing, so we had a pretty top-heavy split. I’m hoping we’ll see some slightly stronger rosters, but even with that, I still expect G2 to stay on top due to how dominant and flexible they are.”

Regardless of where you stand on the Worlds finals result, you can’t deny that next year’s competitive season – European or otherwise – is going to be spicy.