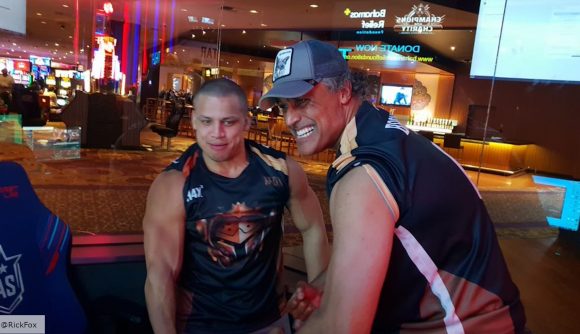 Rick and Kyle Fox will get League of Legends tattoos inked by Tyler’ Tyler1′ Steinkamp himself if their marathon charity stream for the Bahamas Relief Foundation hits its goal of $100,000.

The NBA champion and former Echo Fox owner is taking part in a 24-hour Champion for Charity livestream before the All-Star event in Las Vegas, to raise much needed funds for Bahamians affected by Hurricane Dorian. Fox has so far been joined by a star-studded line up including Tyler1, Lee ‘Faker’ Sang-hyeok, and Hammoudi ‘Yassuo’ Abdalrhman.

At the time of writing this article Fox has raised just over $27,000 for the charity, which he founded, and still has seven hours left to go.

He’s shared some pretty amazing moments with his viewers, including his first pentakill, which was partly casted by Tyler1. The opposition might have stopped fighting after hearing what Fox was doing but it’s a pentakill nevertheless.

“You guys are the best,” Fox shouts in a wholesome clip you can watch below.

Viewers have even had fun with donations too. One person called Coxy Normus got a roar of laughter from the NBA man after he read out his name and $1 donation live on air. It might be immature, but it’s possibly one of the best things we’ve seen today.

Faker lost a Bronze game with Fox, despite dropping 38 kills as Teemo, leading Fox to present the three-time Worlds champion with his own Bronze Faker shirt. Fox even described Iron as a “special place” and admitted it took him 600 games to get out of Bronze.

Current Worlds champion DoinB is even rumoured to join Fox on stream later as it heads into its last few hours. Regardless of the Bronze gameplay on show, the charity stream has really shown the good nature of the League of Legends community.

So, if you want to see the Fox duo get Tyler1 tattoos that they’ll remember for a lifetime, you know what to do. You can watch and donate to the stream here.