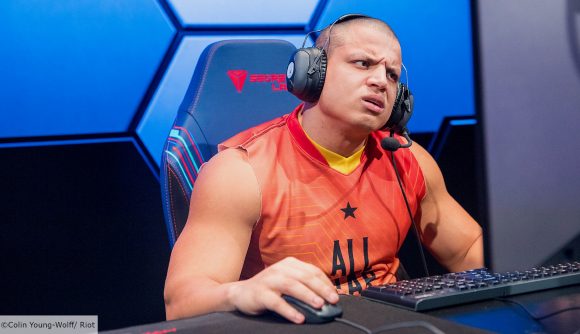 A Twitter spat between a member of Tyler ‘Tyler1’ Steinkamp’s League of Legends team and esports organisation MAD Lions has now resulted in the two teams facing off in a show match tomorrow.

After Christian ‘Dominate’ Rivera – a former pro player and now streamer for Team Liquid – mocked the social media following of MAD Lions in a tweet on January 7, the LEC team clapped back by saying “having a Twitter following doesn’t = skill” and making him aware that they would happily take on Dominate and the rest of Team Tyler1 while they were in North America. Dominate then replied back, saying that MAD Lions is “more doomed in LEC than I thought” for challenging a Twitch Rivals team.

However, it seems that Team Tyler1, despite currently scrimming ahead of a Twitch Rivals event later this month, has accepted the challenge and will play a show match against MAD Lions. The organisation is the newest name in the LEC after their owner, Overactive Media, rebranded Splyce in November 2019.

BTW we playing them fuck it 😀

Tyler1 is used to the taste of victory after his Shadow Dogs Unleashed team went 10-0 to win the last Twitch Rivals event in November last year. However, an actual esports organisation with a team in one of the top LoL leagues in the world will likely be too strong an opponent to defeat.

The show match will be played on Saturday, January 11 at 11:00 PST (14:00 EST/ 19:00 BST) and MAD Lions has confirmed that the match will be streamed on the organisation’s Twitch channel. It will also be very likely that Tyler1 and the rest of his team will all individually stream the action too.