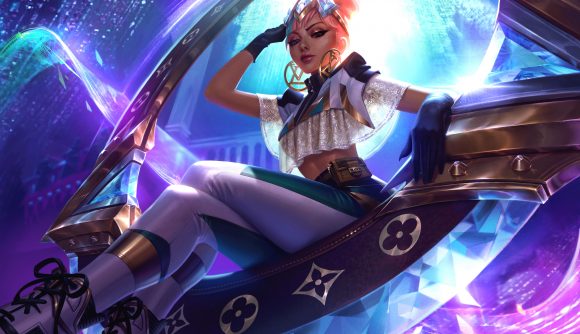 Ever since KD/A performed a virtual concert at last year’s League of Legends World Championship in Incheon, we haven’t been able to stop thinking about, and it turns out neither have you. To celebrate Worlds this year, Riot Games is launching another musical group called True Damage and they’ve got their roots in hip-hop.

The band consists of Qiyana, Akali, Ekko, Yasou, and new champion Senna, and will be brought to life by Becky G, Soyeon, Thutmose, Duckwrth, and Keke Palmer respectively at the Worlds finals on November 10, where they’ll sing their new single Giants.

In true League of Legends fashion, Louis Vuitton has also created two prestige for True Damage members Qiyana and Senna. Qiyana’s Prestige skin will be available on November 10, alongside five True Damage skins, and can only be unlocked via the League of Legends in-game event. Senna’s Prestige skin will be available early next year.

“When League of Legends was released ten years ago, none of us could imagine the cultural phenomenon that it has become,” Jessica Nam, lead producer for League of Legends, says in the press release. “Now it’s clear that gaming sits at the centre of pop culture, and we couldn’t be more proud to partner with such great talent to showcase what League represents to the world.”

And if the sounds of Louis Vuitton skins has got you pumped, Riot Games has confirmed that the designer will be releasing a limited amount of real-life goods inspired by the Qiyana and Senna Prestige skins in the future. So if you want to live your best True Damage life, you better keep your eyes peeled.

To catch the band in action, watch the LoL Worlds finals on November 10 from 4AM PDT (8AM EST/12PM BST)