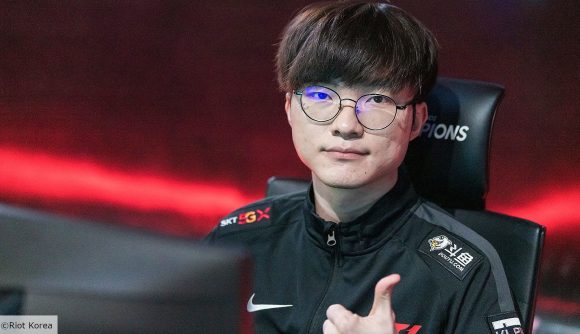 T1 has failed to qualify for the League of Legends World Championships after losing to Gen.G in the final of the LCK Regional Qualifiers.

T1 has won the World Championships three times, but has missed out on the chance to fill the last spot at this year’s tournament after being swept 3-0 by Gen.G. This means that legendary midlaner Lee ‘Faker’ Sang-hyeok will not be playing in Shanghai. This is the second time in three years the iconic organisation has failed to qualify for Worlds after not making the cut in 2018.

T1 reached the semifinals of the tournament last year and were the LCK Spring Split champions this year, but a dramatic drop in form in the Summer Split saw the team come under increased pressure. That pressure boiled over when the team first dropped Faker and then were eliminated from the LCK Playoffs, with T1 having to begin legal action against critics who were sending players and staff death threats.

The LCK Regional Qualifiers were T1’s last hope to reach Worlds. A comfortable victory against Afreeca Freecs yesterday was encouraging, however Gen.G has doomed T1 to watching this year’s Worlds from the sofa.

We’ve tried hard, but our Summer ends here. Thank you fans for supporting us this journey.#T1WIN #T1Fighting pic.twitter.com/P7jP6oO2cJ

Worlds kicks off with the Play-ins on September 25.