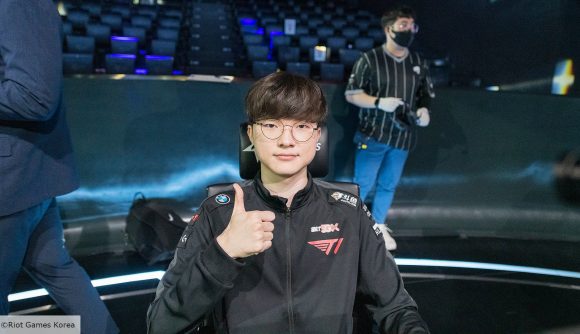 With iconic midlaner Lee ‘Faker’ Sang-hyeok keeping his place in the team after returning from his controversial benching and rookie Lee ‘Gumayusi’ Min-hyeong dazzling on what was his competitive debut, T1 dismantled Afreeca Freecs 3-1 to progress. All that stands between the team and the last spot at Worlds is a best-of-five series against Gen.G tomorrow, September 8. The winner of that battle will qualify as LCK’s third seed but will head straight to the group stages of Worlds after the format was changed due to Vietnamese teams pulling out of the competition.

While fans were pumped to see Faker remain on the starting lineup, it was botlaner Gumayusi who was the talk of the series. Matched up against veteran ADC Jin ‘Mystic’ Seong-jun, Gumayusi shone with some exceptional performances in his first ever LCK match with T1.

Gumayusi may be without experience but he certainly has some decent esports genetics. The rookie’s brother, Lee ‘INnoVation’ Shin-hyung, is a successful StarCraft 2 player, who also represented T1 (then SK Telecom) in the past.

While T1 infamously missed out on the 2018 World Championships, the South Korean team reached the semifinals of last year’s tournament, only to be knocked out by G2.

Despite winning the Spring Split, T1 has suffered a turbulent summer that has even seen the organisation begin legal action against fans sending death threats to players and staff. The threats worsened after T1 was eliminated from the LCK Summer Playoffs and forced into its current fight through the Regionals for a spot at Worlds.

For a team as prestigious as T1, missing out on Worlds in any season would be a disaster – but in 2020 it’s more crucial than ever.