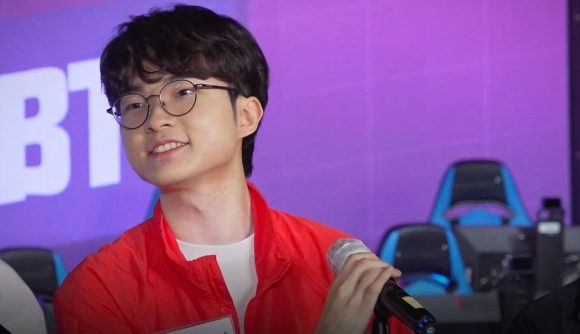 We’ll start this with a disclaimer: we are not experts in Korean culture. What we do know though is that in South Korea, League of Legends and K-pop reign supreme. So naturally, it was only a matter of time before the biggest names in both worlds collided for a chaotic and entertaining collaboration.

As was teased throughout this week, T1’s League of Legends roster would be making an appearance on Run BTS, a web series featuring the world’s biggest K-pop group BTS. Now, the episode is out – and it is pure carnage.

We’d be lying if we said we know exactly what is going on, but we do see the most famous name in League of Legends esports, Lee ‘Faker’ Sang-hyeok, doing some karaoke alongside his teammates, before a game of ‘Mundo dodgeball’ is played on League of Legends. We think the rules entail both teams firing attacks across a line of wards, trying to tag whoever is playing the champion Dr. Mundo on the opposing team, but who knows.

The teams then go on to play indie game What The Box?, which essentially sees everyone take the form of cardboard boxes and look to wipe out the opposition.

You can watch the entire 37-minute-long episode right here. If you were feeling a little flat today, this will definitely give you the energy boost you need.

T1 will return to Run BTS for a second episode that will see them compete in a number of other games, including Fall Guys.