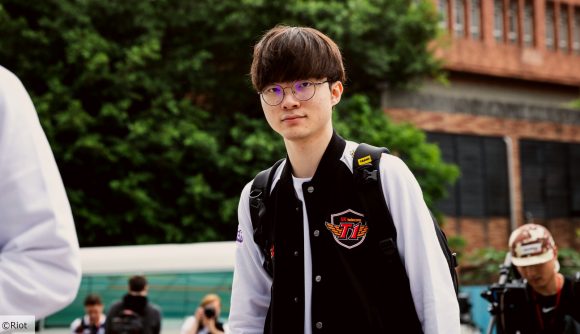 The South Korean government is planning a new bill which will allow esports stars like Lee ‘Faker’ Sang-hyeok to delay their mandatory military service until the age of 30. The news was revealed by Korean news outlet N Sports and translated on Twitter by journalist Kwanghee Woo.

Woo suggests the bill “might as well [be] call[ed] the ‘BTS and Faker bill’,” as it will not cover all esports athletes, only those who have made a significant contribution to Korea’s global image in the field of pop culture and esports; something which applies to the chart topping boyband and legendary League Of Legends player, but does not cover every esports player in one fell swoop.

The bill will only delay the service, rather than grant exemptions. Public opinion has turned against exemptions, so reductions or delays are more common. This bill will not reduce the amount of time served, but will push back the start date.

While exemptions from service have grown much rarer in Korea recently, reductions are still granted for sports stars; Spurs winger Son Heung-min was given a reduced service after leading South Korea to the Asia Cup, and served his time during the Premier League lockdown.

Faker is only 24, so with this bill would be able to play for six more years without fear of conscription disrupting a season. Despite Woo suggesting the bill might as well be named after him though, he would not necessarily be the only one to qualify; until the bill is further along, we won’t know the parameters or the cut off.

Recently, Starcross 2 players Baek ‘Dear’ Dong Jun, Eo ‘soO’ Yun-su, and Kim ‘Impact’ Joon Hyuk all stepped away from the scene to complete their military service. Under the proposed bill, they would have been unlikely to have qualified for delay if the law is applied as stringently as the exemption law.

A new bill is being planned in Korea (might as well call it the "BTS and Faker bill"), to allow individuals who have made significant contributions to Korea's global image through pop culture and/or esports to delay their military service until age 30. https://t.co/aBHaKPLMTv

Military conscription in South Korea does not necessarily mean front line service. Though for many it does include work in the armed forces, it also covers work in community programs, low level government work, and public transport, which is determined based on a variety of tests and skills of the person in question.