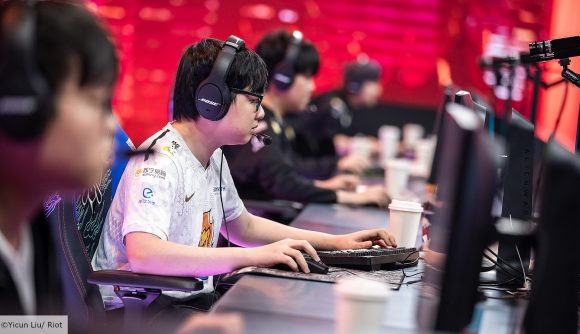 When it comes to League of Legends, it’s always worth remembering that it isn’t just Bronze 2 noobs that can get easily tilted on the Rift – some of the world’s top players can too.

This has been highlighted recently by Suning’s Vietnamese jungler Le ‘SofM’ Quang Duy, who less than a week ago was on stage in Shanghai playing in the final of League of Legends Worlds. Now though, he’s reportedly having to cough up a month’s salary as a punishment for going AFK while playing solo queue. A Weibo post from Suning began to circulate yesterday, and now translations confirm that SofM, on seemingly multiple occasions, displayed “negative behaviour” while playing ranked League of Legends.

While the post appears to suggest multiple infringements, one moment in particular was unearthed on Reddit, which shows SofM, playing as Graves, asking to forfeit after a teammate disconnects. When the opposition team fails to agree, SofM then appears to sell all of his items before going AFK.

In a translation of Suning’s statement on Twitter, the Chinese team says: “In order to put an end to future behaviour of this kind, the organisation has carried out serious education in regards to SofM’s misbehaviour in-game… SofM is also deeply aware of the mistakes in his behaviour and the example he needs to set as a professional player.”

Players going AFK is just one of the problematic behaviours Riot has been keen to clamp down on to improve players’ experience in ranked League of Legends and to stop them dropping ranks for the actions of others.