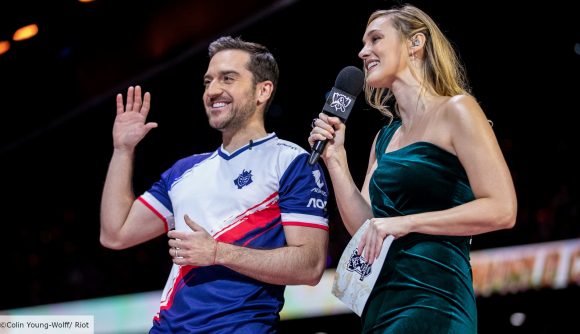 The future is bright for European League of Legends and strong showings from the likes of Fnatic and G2 in the last two years are not flukes, according to Worlds host Eefje ‘Sjokz’ Depoortere.

The popular host tells The Loadout that she “foresees great things” for the EU region in the coming years and believes that European teams can put in another impressive display at next year’s Worlds in China. She also dispels the myth that this is the first year that European teams have shone at Worlds and thinks that the region has been a consistently strong force in League of Legends for a few years now.

“I’m super positive,” Sjokz says. “I think EU teams have always done relatively well at Worlds to be honest, everyone this year was saying ‘ah it’s so strange,’ but really when we look at the bigger picture, the proof is in the pudding. Am I definitively going to say we’ll have a EU world champion in the next three years? No. But if you’d asked me at the end of 2017 when Samsung and SKT were in the final, I would’ve said it will never happen. Now, I believe it could happen. And will happen, eventually.”

“Initially I was the typical blubbering fan, you know? ‘Well that’s it, EU are never going to win.’ But when you look at the results throughout the year like Rift Rivals, MSI, then performances at Worlds, I foresee great things.”

FunPlus Phoenix’s 3-0 thrashing of G2 earlier this month left a lot of European fans heartbroken, including Sjokz. Despite her professionalism on stage during the post-final interviews, pictures emerged on social media of her in tears following G2’s defeat.

She left the sunshine to us and left the tears to the background. pic.twitter.com/qTpIqe8IFm

“I think the fact that it was such a quick 3-0 meant it didn’t really set off any emotions straight away,” Sjokz explains when asked how she kept her emotions in check during the interviews with FunPlus Phoenix. “However, I remember distinctly the whole segment ended, I stepped down from the stage and as I put my foot down from the last step and hit the ground, I just start crying. OK, well it was good timing! But also, I didn’t really understand…. Obviously I was sad about G2 but I think the emotions of the past six weeks just wanted to come out all at once.”

That was hard. But the show must go on. Congratulations to FPX! The LPL keeps reigning supreme. It’s incredibly difficult right now, but we can still be extremely proud of G2 and the LEC.

Sjokz also reveals that she had an inkling that G2 were not going to be victorious about half way through the final.

“After game one I was like: ‘Ah, this will be fine, G2 bounce back very well.’ G2 are good at dealing with information and are quite un-tiltable. But for some reason they lost the plot, and I’d say like 10-12 minutes into game two, I was like: ‘OK well they showed the Pyke pick in the first game, now they’re doing their Gragas/Yasuo which they’re very good at, but they’re still not winning’… It’s not that I didn’t believe because crazier things have happened, but throughout the second game I was thinking this isn’t their day.”

While G2’s year as a whole was close to perfection, their loss in the final is still hard to take for EU fans who have had to experience consecutive final losses at the hands of Asian opponents.

However, as Sjokz says, these performances are not simply flukes or one-offs, and European LoL is continuing to grow. Hopefully EU teams can continue to build in 2020 for what will be a tough Worlds in the home-nation of the last two winners of the competition.