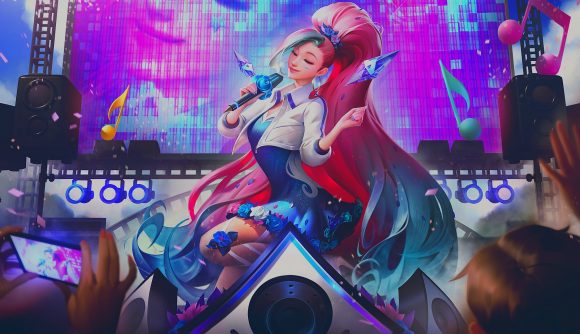 League of Legends’ newest champion Seraphine has had one of the most unorthodox and longest introductions into the game ever. Emerging as a mysterious social media account for an aspiring musician with dreams of being a pop star, her eventual reveal coincided with her collaboration with LoL band K/DA.

While new champions are often some of the most exciting moments of the year in League of Legends, Seraphine’s introduction has been incredibly divisive. This is perfectly illustrated in the reaction to her Champion Spotlight, which dropped on October 29 when Seraphine hit the servers. The video has gained a rather unwanted record: it’s the most disliked Champion Spotlight ever released in League of Legends’ 11 year history.

It is also the first Champion Spotlight to have more dislikes than likes. As was pointed out by one Yorick main on Reddit, his beloved champion no longer has the worst like ratio for a Spotlight (13,000 likes to 9,300 dislikes) as Seraphine has now taken over that title from the Shepherd of Souls.

While Yorick’s 2011 Champion Spotlight had the worst ratio, Sett actually had the most dislikes prior to Seraphine with 12,000. However, the brawler also had over 80,000 likes.

While reactions to a Champion Spotlight are not totally indicative of the overall perception of a champion, there have been multiple aspects to Seraphine that have drawn criticism from League of Legends players.

From a gameplay standpoint, the similarities between her abilities and those of previous champion Sona saw Seraphine dubbed “Sona 2.0” by many.

Seraphine’s lore within Runeterra has also drawn plenty of criticism and has even seen Riot’s co-founder promise that her backstory will be changed.

However, the most controversial aspect of Seraphine has been the way she was introduced. While having her as a social media star that links up with K/DA for their comeback is certainly creative and original, many fans have felt uncomfortable with Riot’s portrayal of the fictional character through her Twitter and Instagram accounts. Posts about vulnerability and self-confidence on her road to stardom in an attempt to be relatable have left a sour taste.

While Seraphine’s appearance alongside K/DA at the opening ceremony of the LoL Worlds 2020 final was an iconic moment, Riot’s new approach to creating hype around a new champion definitely hasn’t had the widespread positive reception it would have hoped for.