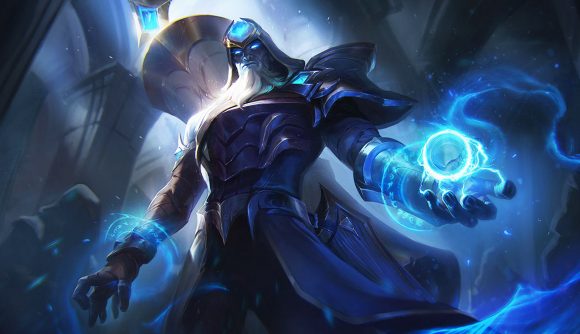 League of Legends Season 11 has seen a huge change in the game’s items. With the introduction of Mythics, players have had to adjust their builds, as well as the way they play certain champions. And, as a slew of items have been added to the game, so too have they been removed. Classic tools like Frozen Mallet, Hextech Gunblade, and Statik Shiv were all sent to the Shadow Realm during the preseason. In a new blog post, Riot addresses why these items were removed, while going into greater detail about the removal of one of the game’s most beloved items: Rod of Ages.

According to game designer Matt ‘PhRoXzOn’ Leung-Harrison, items are either reworked or removed if they “violate certain principles”. Hextech Gunblade for example got the chop for its point-and-click active effect, and the power it gave to assassins. Meanwhile, Statik Shiv bore too many similarities to Runaan’s Hurricane. Finally if an item became a must-buy first purchase for certain champions to the point that flexibility couldn’t be added, or the item would remain a mandatory buy in Mythic form, it had to go.

This was very much the case for Rod of Ages, which mana-hungry picks like Ryze and Anivia relied upon. Additionally, the Rod excluded manaless champions such as Mordekaiser and Rumble which, as PhRoXzOn notes, also take a liking to having a mixture of damage, durability, and healing in their build.

“We actually tested several versions of Rod of Ages as a Mythic item,” PhRoXzOn says, “such as featuring a transformation mechanic and cool unique passive like Seraph’s/Muramana. However, when balanced, users felt like they were irrelevant for too long while waiting for their Mythic item to scale, and it was a mandatory purchase for champions that wanted to scale (rather than a choice).”

Eventually, the Rod was removed, with those manaless champions like Mordekaiser gaining access to Riftmaker. Meanwhile, champions which require both health and mana could opt for Everfrost – an item which PhRoXzOn notes will be receiving buffs over the coming patches due to its low popularity.