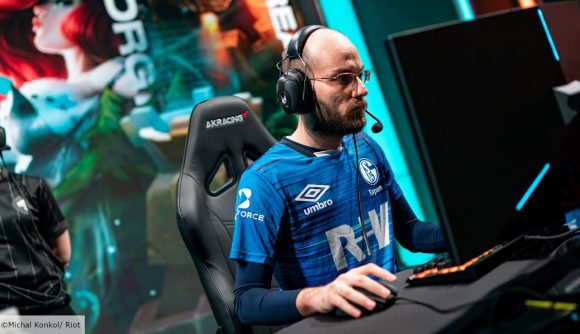 Schalke 04’s AD carry Konstantinos-Napoleon ‘FORG1VEN’ Tzortziou has announced that he has mutually agreed with his team to “step down” from the roster due after labelling them “unable” and “unwilling” to be competitive in League of Legends.

Schalke, who is currently 0-6 after the first three weeks of the LEC, announced earlier today that academy ADC Nihat ‘Innaxe’ Aliev would be stepping up to the main roster in place of FORG1VEN, because “it aligns with our vision to give Academy players time in LEC if they perform well.” While the initial roster announcement made it seem as if things with FORG1VEN were civil, the Greek player posted soon after his own announcement to his personal Twitter account.

It reads: “In my 7+ [years] LoL career I always wanted to play competitively and win. As of now at least, the current roster doesn’t fit this principle. Schalke is unwilling/unable to make changes to fit that goal, so we mutually agree that I step down until they are willing to do so.”

We have decided to give Innaxe a shot, as it aligns with our vision to give Academy players time in LEC if they perform well. We’re still counting on @FORG1VENGRE for Spring & Summer Split and would like to stress that Kostas has been very dedicated during his time with the team.

FORG1VEN, who returned to competitive LoL this offseason with Schalke after a forced absence due to military service, was one of the LEC’s most talked about players in the build up to the Spring Split, with fans keen to see how the Greek veteran would fair after time away.

With Schalke’s disastrous start to 2020, it seems that his dream of easily fitting back into life as a competitive player has not gone to plan.

Despite the main roster going without a win in the LEC so far, Schalke’s youth team has been performing exceptionally and gone unbeaten in the Prime League, so the decision to move Innaxe to the main team is probably the right one.

Whether FORG1VEN’s statement is the reaction or cause of Innaxe’s promotion remains to be seen, but it looks like we won’t be seeing him in the LEC for a little while.

Schalke faces Rogue and reigning champions G2 this weekend in the fourth round of Spring Split fixtures.