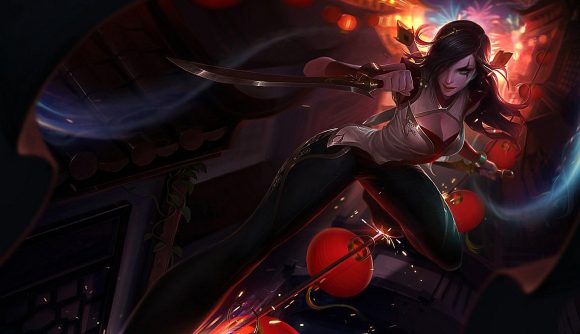 The 151st champion in League of Legends, which according to leaks from last week looks set to be Samira, has had details about her kit and appearance revealed by a Brazillian streamer.

A Twitter thread from LoL streamer ‘Streamie’, who also predicted the releases of Lillia and Yone, was posted to the League of Legends subreddit and it claims that she has seen a video showcasing Samira’s in-game abilities and appearance. Via a translation from Portuguese to English, Streamie says that Samira will be “easy to play” and has a simple kit. She also claims that she will have an ability that can “reflect damage,” has a “tornado” style ultimate similar to Katarina’s Death Lotus.

Appearance-wise, Streamie describes the new champion as having a Rambo vibe and says that she has two weapons: a pistol and a “Katarina-style” blade. Samira could also take some inspiration from Aphelios, as Streamie reports that her attacks will cycle between the two weapons.

While Samira reportedly has the pistol and dagger as her main weapons, she will apparently pull out a machine gun for her “tornado” ult. We can’t wait to replicate this famous Rambo scene on the Rift.

Her ult will also allegedly have a form of “style meter,” which increases with the more enemy champions you hit and slay with the attack. This apparently looks like a rose, with petals forming for each champion you connect your attack with. This corroborates with a lot of the easter egg files that were uncovered last week and first leaked Samira.

The post ends by saying that Samira will be “extremely popular, strong and will sell a lot of skins.” Ticks all the boxes then.

If all of Streamie’s info is on the money, then Samira promises to be a really interesting addition to the champion pool and one that is accessible for the majority of players. Things could change by the time she is released later this year, but with Streamie’s track record on the last two champions, this will likely be a pretty accurate description of champion 151.