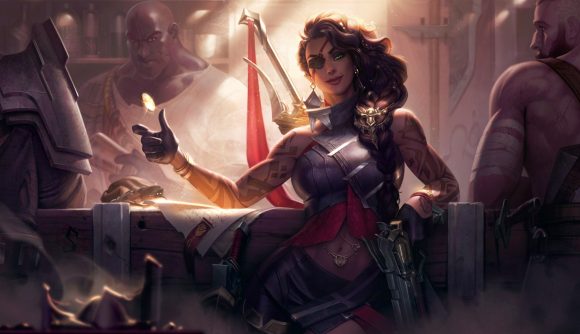 Riot has issued a micropatch to severely nerf League of Legends’ latest champion, Samira, just one day after her release. At first glance, the champion known as The Desert Rose seems to be fairly complex and particularly vulnerable in the early stages of a game, but the statistics tell another story.

According to U.GG at the time of writing, Samira has a 48.78% win rate across all ranks, including a 50.91% win rate at Diamond and above – the most competitive end of LoL ranked. It was only a matter of time before she got hit with a big nerf, and thankfully Riot acted quickly to try to stop her from controlling the meta.

Much like the 151st Pokémon, Mew, LoL’s 151st champion is simply too powerful. Perhaps players should have guessed at her power after staring deep into her frighteningly green eye, but hopefully, a hotfix will diminish her dominance without dulling that knowing glint.

The trouble comes with Samira’s powerful ultimate, Inferno Trigger. The attack can only be performed when her style grade reaches ‘S’ by chaining basic attacks, but then unleashes a nigh-unstoppable barrage that hits enemies ten times, dealing physical damage, applying lifesteal, and is able to critically strike.

League of Legends’ lead gameplay designer Mark Yetter confirmed the nerf on Twitter, saying Riot is “committed” to releasing champions that are balanced in the “long term.”

The nerf cuts Samira’s base HP from 600 to 530 to make her more vulnerable in the early game, and decreases the damage of her ultimate.

However, we’ll have to wait and see whether this nerf does enough to balance the game’s newest cast member. Many players found it was the combination of Inferno Trigger’s incredible damage after Blade Whirl destroyed any enemy projectiles and turrets which tipped her over the edge.

Whether this combo continues to wreak havoc after the damage nerf remains to be seen, but Riot seems to be keeping on top of hotfixes and micropatches, so we can expect more balancing updates in future if something is still not right.