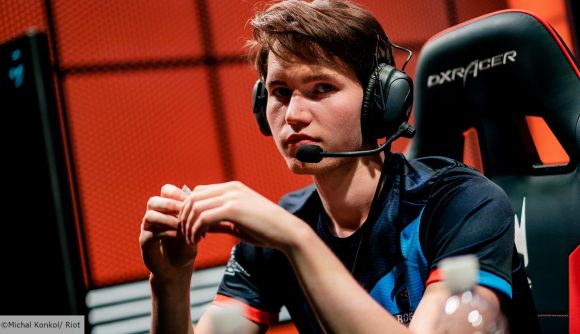 Rogue’s Swedish top laner Finn ‘Finn’ Wiestål has revealed which League of Legends champions he loves and loathes and also gave his thoughts on which of his fellow top lane players he thinks are the best in competitive LoL.

The 20-year-old was taking part in a Reddit AMA after signing a contract extension with Rogue and was quizzed about all aspects of competitive League of Legends. Finn reveals that his least favourite champion to play against is Rek’Sai. “When I’m playing blue side,” he explains, “I am a firm believer that it is impossible to dodge her Flash + W ganks.”

Rogue fans also asked Finn who his favourite champion was to use in LoL, and he came out with an interesting answer. “My favourite champion is Irelia,” Finn says, “because I always feel like I can carry with this champion no matter the state of the game.”

As well as being grilled about his favourite champions, he was also asked which of his fellow top lane players in competitive LoL he thought were at the top of their game.

We are happy to announce that @Blomster_Finn has signed a new deal with Rogue until 2022! #GoRogue #LEC pic.twitter.com/G0ay0AAD71

Finn goes on to say that by the end of the 2020 season, he wants to be able to compete with the likes of these four players and be considered one of the best top laners in the world.

Rogue will be looking to improve on their LEC performances from 2019, where they finished fourth in the summer split and dead last in the spring split. They’ll certainly be hoping that Finn will be able to fulfil his own ambition to become one of the best top laners out there in order to compete with the wealth of European talent next season.