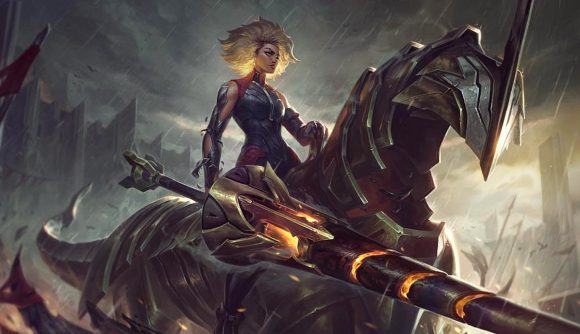 Out of nowhere, Riot Games has just announced champion 153 in League of Legends. The surprise announcement, which for once wasn’t leaked into oblivion, reveals Rell, The Iron Maiden, as the game’s next champion, and she looks pretty awesome.

Rell will be the tanky support champion teased by Riot in its September roadmap update for 2020. The roadmap speaks of an “extremely dangerous,” “heavily armoured” fugitive that is “known to mount a quick retreat when cornered.” Rell certainly ticks all those boxes, appearing as an armour-clad figure atop a ghostly steed in her splash art. She’s also equipped with a massive spear, which was sneakily teased in the artwork for the most recent set of League of Legends patch notes (check the box of weapons on the left).

Riot has also revealed her abilities, which revolve around her being an armour-shattering and magnetising champion that will leave enemies more vulnerable to the big hitters on a team. Her passive, Break the Mold, sees Rell “steal a portion of her target’s Armor and Magic Resist” with her slow striking attacks.

Her Q is called Shattering Strike, and sees her thrust her spear forwards and shatter the shields of any champions standing directly in front of her. The damage does drop off after hitting each champion, however.

Rell’s W is called Ferromancy, but can be performed in two different ways depending on whether she is in her mounted form or in her armoured form. Essentially, her steed can morph into a set of armour for Rell herself, or revert back into her horse-like steed to give her boosted movement speed and damage.

This heavy-armored battle maiden rides a furious storm of steel into every fight. Learn more about her metalmancing abilities in the thread below! pic.twitter.com/zOgHRZHTSF

Her E is a great support ability and is called Attract and Repel. It sees Rell target an ally champion and give them bonus Armour and Magic Resist. On breaking this chain next to enemies, it will stun them.

Finally, her ultimate: Magnet Storm. Rell pulls enemy champions towards her and will essentially move them wherever she goes with her magnetism for a few seconds. While this doesn’t prevent enemies using abilities, it can drag them out from team fights or into the path of a teammates attacks.

Rell will be the final champion to be released in 2020, but we currently don’t have a date for when she’ll hit the PBE.