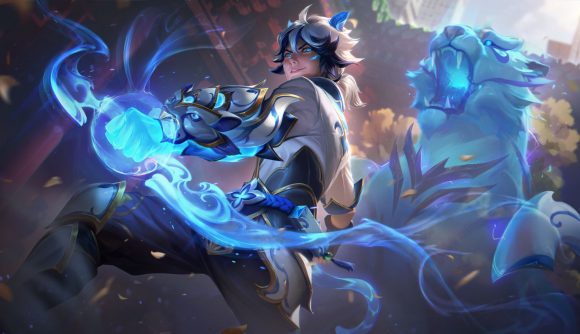 While there’s been plenty of hype this week about League of Legends’ electrifying next champion Zeri (who seems suspiciously linked to Valorant’s equally electrifying new agent Neon), fans are also excited for the new Porcelain skin line that drops in patch 12.2.

While the skin line features new looks for champions such as Lux and Amumu, it’s Ezreal’s skin – and more specifically, one of his emotes – that’s caught the attention of meme connoisseurs the world over. While Ezreal certainly looks dashing standing alongside his striking white tiger companion (who is affectionately named Stripes) his emote pays homage to a rather less intimidating cat.

The emote sees Ezreal sit down and play the sides of a large porcelain vase like a drum, while Stripes stands alongside rhythmically bobbing its head. This is a direct reference to the well-known Vibing Cat meme which became immortalised as the CatJAM Twitch emote.

More specifically, its referencing the Vibing Cat laid over a video of a street musician performing Ievan Polkka on a tambourine – arguably the most famous usage of the meme.

While this will be Ezreal’s sixteenth appearance in a skin in a League of Legends skin line, this playful meme reference will likely ensure players are still compelled to purchase it.

As several League of Legends fans have pointed out on social media, Porcelain Ezreal’s emote has also sparked memories of similar meme references from Riot’s design team. 2018’s God-King skins for both Darius and Garen saw the champions and their furry friends pay homage to popular memes: the Brazil Dog Dance for Darius, and the Keyboard Cat for Garen.

The Porcelain skin line will release alongside new champion Zeri in League of Legends on January 19 when patch 12.2 is expected to go live.