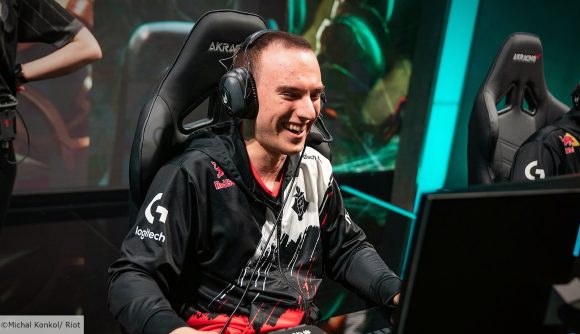 Good teammates always have each other’s backs. They encourage one another, give helpful pointers so that they can improve in the future, and push each other to become the best competitors possible. Unless you’re on G2’s League of Legends team, that is.

While G2’s jungler Marcin ‘Jankos’ Jankowic was streaming some ranked play to over 5,000 people on Twitch, he failed to realise that he’d just been put in a match against his teammate and captain, Luka ‘Perkz’ Perkovic (under the alias ‘ADCplz123’), who was just across the hall. With Jankos locking in Fiddlesticks, he dropped in the Rift still completely unaware Perkz was on the opposite team.

In the early stages of the game, Jankos racked up his first death after being hounded by an enemy Trundle who took his Fiddlesticks from full HP down to zero in a matter of seconds. While this frustrated Jankos slightly, you then hear the door to his room swing open, causing him to turn around.

“You got fucked so hard!” shouts the recognisable voice of Perkz off-camera, who had briefly gone AFK just to come and torment his G2 counterpart. He then laughs to himself for a few seconds before closing the door again, leaving Jankos extremely confused.

“Wait what?” he says before checking the scoreboard and hovering over the enemy Sivir. “Oh, it’s Perkz… I’m playing against Perkz.”

While the pair have helped guide G2 to LEC titles, MSI victories, and a spot in last year’s Worlds final, that certainly doesn’t mean they don’t dabble in a bit of banter.

But just imagine living across the hall from everyone you play in solo queue. Yeesh.