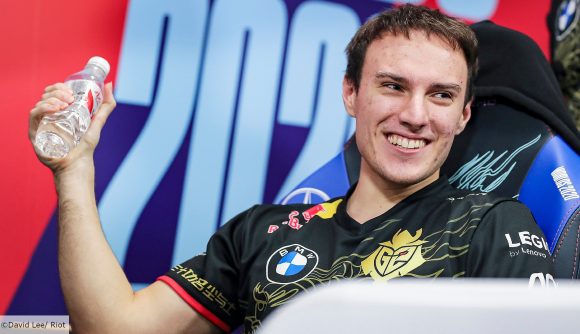 November 13, 2020 Cloud9 has verbally committed to acquiring Perkz, according to Jacob Wolf

G2’s League of Legends star Luka ‘Perkz’ Perkovic has dominated the pre-transfer window rumour mill with speculation that he could be on his way out of the organisation.

It now appears that Perkz is considering a wide range of options, both in the LEC and across the pond in the LCS, with reports suggesting that six different League of Legends teams are in talks with the Croatian. ESPN’s Jacob Wolf claims that over the past two weeks, Perkz and G2 have been “actively engaging” with Misfits and Team Vitality in the LEC, and Evil Geniuses, Cloud9, TSM, and 100 Thieves in the LCS.

Wolf also says that Perkz’s favoured new team would be Cloud9, and that the organisation may be willing to pay a “record-setting” salary to secure him. However, earlier this year Perkz, along with the rest of his LoL teammates and G2’s Rocket League and Rainbow Six Siege rosters, signed a new contract extension committing himself to G2 until 2022. As a result, Perkz reportedly has an insane buyout fee of almost $5 million, which is understandably a big obstacle to overcome for teams wanting to sign him.

As well as the six teams listed by Wolf, other reports suggest that Perkz may also be considering LEC rivals Fnatic as a new home.

The holdup remains Perkz’s buyout, which G2 have told several teams is just shy of $5 million, according to sources.

If Cloud9 and G2 can come to terms, Perkz would reunite with @Zven, his former teammate. The duo won three EU LCS titles from 2016-17.

Following the transfer reports, the Croation joked with his followers after tweeting out that “G2 FNC/MSF/VIT/C9/TSM/EG/100T Perkz” is going live on Twitch for a stream. During the stream, he promises viewers he will “tell them everything at some point” but later claims in a philosophical tone: “Nothing in life is what it seems like on the first look.”

Perkz is both the current captain and the longest serving member of G2’s League of Legends team. If he is to depart, it would signal the end of a five year stint with the organisation, in which he won nine LCS titles, one MSI, and made a Worlds final appearance in 2019.