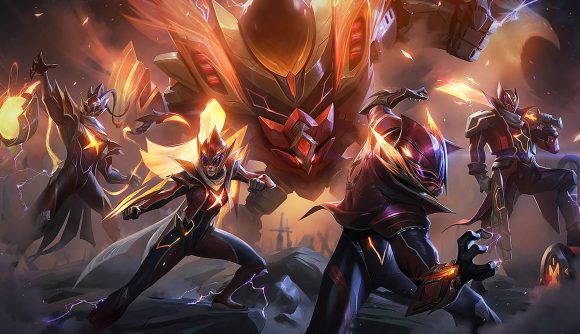 Despite Riot Games spoiling League of Legends fans this summer in the champion department with new additions Yone and Lillia, it looks as if champion 151 is just around the corner.

As discovered by Surrender at 20, files in the most recent PBE update appear to give us a few clues and a potential name for the next champion to be added to LoL. Firstly, a new emote called ‘Style: Rank S’ was found, which shows a silver ‘S’ in front of a red rose. We’ve actually seen this exact emote before, as it featured in a gif in Riot’s Champion Roadmap post in June.

Then there are a bunch of easter egg files which all include what is thought to be the champion’s name: Samira. The files all appear to be sketches of visual effects for Samira, showing things like roses and rose petals in keeping with the emote’s theme as well as ‘energy rays’ and ‘screen flames.’ Again, flames featured in the Champion Roadmap gif.

This all but confirms Samira to be the “dressed to slay” marksman teased in the Roadmap post, which promises to be the ideal champion for “thrill-seekers” in League of Legends.

Notably, some easter egg files were found referencing “Samira” and match the assets used for this icon pic.twitter.com/wbwjC0GMf9

With Lilia added in Patch 10.15, and champion 150 Yone ready to be unleashed in 10.6, could we potentially be seeing a hat-trick of new champions in consecutive updates with Samira being added in 10.17? With easter eggs this glaringly obvious, Samira’s reveal can’t be too far away.