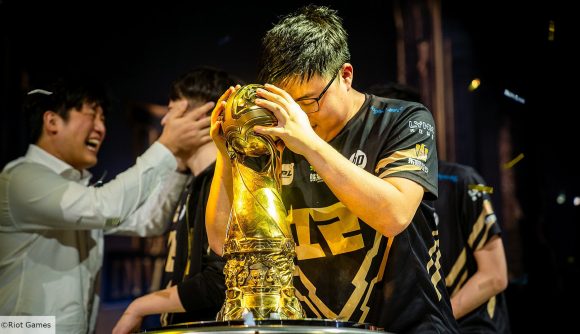 With the League of Legends 2021 Mid-Season Invitational rapidly approaching, it won’t be long until we get to see the likes of Worlds champion DWG KIA, the LPL’s Royal Never Give Up, and the LEC’s MAD Lions duke it out on the Rift. However, many have been eagerly awaiting the full schedule for the tournament’s group stage – that is, until now.

The LoL Esports site has been updated to include the complete fixtures list, kicking off with an absolute banger – DWG KIA vs Cloud9. For those operating in Pacific Standard Time, it’s time to crack the coffee pot out because it’s an early one, as the game begins at 06:00 PST / 14:00 BST on May 6.

DWG KIA vs Cloud9 is undoubtedly the most significant game of the group stage. With the absence of reigning MSI champion G2 Esports at this year’s event, the onus falls to the team’s star midlaner, Luka ‘Perkz’ Perković, to defend his title. For DWG KIA, which maintains a friendly rivalry with G2, the matchup between Perkz and Heo ‘ShowMaker’ Su is bound to be spicy.

The MSI group stage will take place from May 6 to May 11, followed by the rumble stage – which decides the top four teams heading into the final knockout stage – from May 14 to May 18. Those top four teams will then take to the Rift in a series of best-of-fives to decide the overall victor from May 21 to May 23.

11 regional champions are heading to Iceland for #MSI2021. Who will Break Out? Watch live May 6-23 (PT) at https://t.co/lh1tk7wEe0 pic.twitter.com/SKyMjptHxL

Alongside the schedule, Riot has also announced that those who tune in through the LoL Esports website throughout the event will be eligible to snag some in-game loot if they have drops enabled. Goodies can also be gained from completing Watch Missions found in the LoL client. Indeed, MSI is set to be a treat, both for the eyes and for our in-game cosmetic collection.