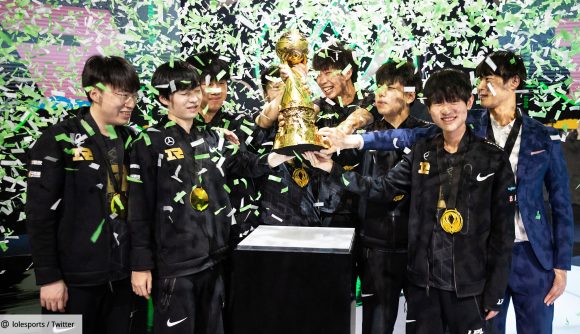 With the conclusion of the 2021 League of Legends Mid-Season Invitational, we once again find ourselves in a void without international competition – that is until Worlds comes back around later this year. And with this year’s MSI setting new viewership records, it seems the post-tournament blues will be hitting more of us than ever.

According to Esports Charts, this year’s tournament recorded over 60 million watch hours over its duration – nearly 20 million more than the last MSI in 2019. Yesterday’s final between Royal Never Give Up and DWG KIA – which eventually went the way of the Chinese representative – racked up an astonishing 1.8 million viewers at its peak. This eclipses G2 Esports’ dramatic victory over T1 in 2019 only topped out at 1.7 million viewers.

The average viewers for this year’s tournament was, unsurprisingly, up from 2019, with over 700,000 fans tuning in at any one time on average. Though not quite up there with Worlds just yet – and let’s face it, it’d be a shock if it was – the numbers show just how important having that second international competition is to both fans and competing teams.

This year’s tournament had everything – Pentanet Gaming setting records for the Oceanic region, Beyond Gaming botlaner Chiu ‘Doggo’ Tzu-Chuan’s dream run on loan with PSG Talon, and of course Li ‘Xiaohu’ Yuan-Hao becoming the first player to win an international tournament in different roles, just to name a few of its numerous storylines.

Ming + Xiaohu
how it started how it's going pic.twitter.com/ipBYtP0qdY

With MSI giving us so many fantastic moments, LoL esports fans will be hoping for an even better experience when Worlds returns later this year.