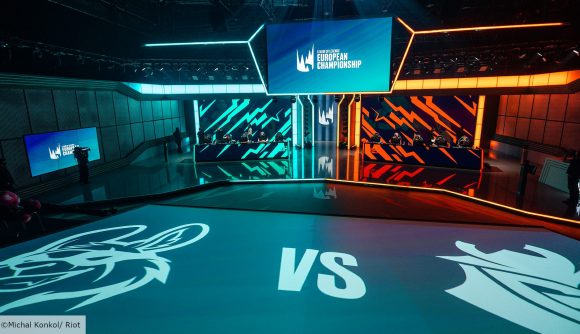 Misfits has reportedly sold its spot in the League of Legends European Championship to another organisation, an LEC insider has claimed. The new owner of the spot will also apparently be announced shortly on June 27, the same insider says.

Former Esportsmaniacos journalist ‘Eros’ says in a Twitter post that Misfits will not be in the LEC next year and that it has already agreed the sale of its spot in the league with another party. It is important to note that at the time of writing, his claims are yet to be supported by other credible sources, and Misfits is yet to publicly address his report.

While Eros has theorised that potential buyers could include Team Heretics and the incredibly popular French organisation Karmine Corp, the latter has been widely shut down by other insiders and even by an employee. Karmine Corp’s managing director of business and strategy, Xavier Oswald, says on Twitter: “Always beware of premature announcements in search of likes” (translated from French to English by DeepL).

Any sale of an LEC slot would be worth tens of millions of dollars, which rules out the vast majority of esports organisations. In June last year, Schalke football club sold its spot in the LEC to team BDS for 26.5 million euros (around 26.8 million dollars, looking at current exchange rates).

Misfits has had a presence in the European LoL scene since 2016, and was considered a strong team in the pre-franchise era. In 2017, it even qualified for LoL Worlds and finished in the top eight after making it out of the group stages.

However, since the LEC was formed and the franchise structure was put in place, Misfits has struggled, although its highest finish of fourth was achieved in this year’s Spring Split.

Misfits also has a development League of Legends roster, Misfits Premier, competing in the LFL.

Misfits Gaming, as an organisation, has committed heavily to franchised leagues over the last few years. As well as its LEC team, it also has a team in the Overwatch League (Florida Mayhem) and the Call of Duty League (Florida Mutineers). With the company itself being based in Florida, pulling out of a European market to focus on its efforts in North America is a plausible reason for it selling its LEC slot.

We will update this story with more information when it becomes available.