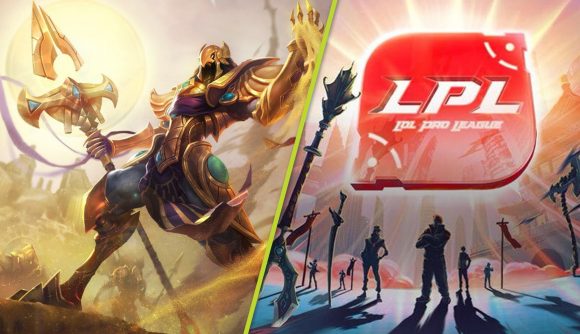 April 8, 2022 Two days after being placed under investigation, Jay has now been permanently banned from all Riot and Tencent competitions for life. LGD Gaming will face no punishment.

A League of Legends pro in China’s LPL has been banned from all Riot Games and Tencent competitions for life after incriminating messages emerged showing him to be match fixing. LGD Gaming’s midlaner Chen ‘Jay’ Bo was reported by his team to the LPL on April 6, and after a swift investigation, he has now been issued his punihsment.

The news was first reported by Korizon’s Kevin Kim, who says that Jay “had communicated with an outsider to intentionally lose select LPL matches” during the Spring Split. Screenshots of the messages alleged exchanged between Jay and a third party, which were translated into English by Dexerto, were posted to Chinese social media site Weibo by an anonymous account. While there are several exchanges, one seems to involve Jay throwing in a match against Top Esports.

The messages potentially suggest that Jay was not the only one being influenced either. One message mentions a “teammate” that could help him in a certain scenario. At this point though, no other member of LGD has been named or reported.

Jay was one of four players brought into the team last December during the offseason as part of a roster overhaul. With LGD finishing joint-last in the Spring Split, these investigations and his ban won’t impact the currently ongoing LPL Playoffs. LGD finished the split with a poor 3-13 record. The team will now have to either bring in a new starting midlaner or promote substitute Ji ‘YeG’ Xin-Yu for the Summer Split.

Due to LGD’s initiative to report this issue to the committee, and their active cooperation in the investigation of this matter, no penalty will be given to the organization.

In a statement posted to Weibo, spotted by Kim, the LPL says that Jay’s lifetime suspension will “with immediate effect. Jay’s ban will cover all Tencent and Riot Games competitions down to a semi-pro level, and the player will also not be allowed to stream League of Legends-related content.

The LPL says that due to its swift action in reporting Jay, LGD will escape any form of punishment.

Sadly, match fixing is nothing new in Chinese League of Legends. Last year, a massive investigation saw 38 players and coaches banned for participating in match fixing across both the LPL and the league below it, the LDL.