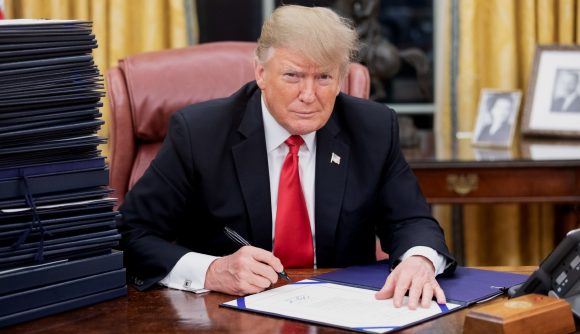 European fans who played and watched a lot of League of Legends back in the day may feel a sense of nostalgia when watching the latest video posted by US President Donald Trump on Twitter. And no, it’s not because he’s yelling about Kalista being OP or sporting an old-school G2 jersey.

It is because the video, which is essentially a highlight reel of “promises kept” by President Trump since he was elected, has a rather recognisable backing track. Keen-eared viewers noticed that the music used in the video is the exact same music that was played during the champion select phase in the LEC – previously the LCS Europe – from a few years ago.

While many fans called for Riot to copyright strike the President for using its theme music, it transpired that it wasn’t Riot’s at all. The track is in fact ‘The Throw Down’ by well regarded composer and producer Gregg Lehrman, and is one of a number of royalty-free pieces of music Riot use in their broadcasts.

This was backed up by the LEC’s broadcast producer, who tweeted: “We both use our own original music, licensed music from 3rd Party “Production Music” sources, and more.”

The original music, without the interruptions of President Trump, can be found below for your nostalgic viewing pleasure.

Lehrman has also composed soundtracks and theme tunes for a number of huge movies – such as Avatar and Marvel’s The Avengers – and TV shows like Saturday Night Live, according to the musician’s website.

So while the President won’t be getting in any hot water over his use of the music, it did give long-time fans a nice throwback to LoL of old. And it was certainly a better choice than the LEC’s latest addition to its music catalogue…