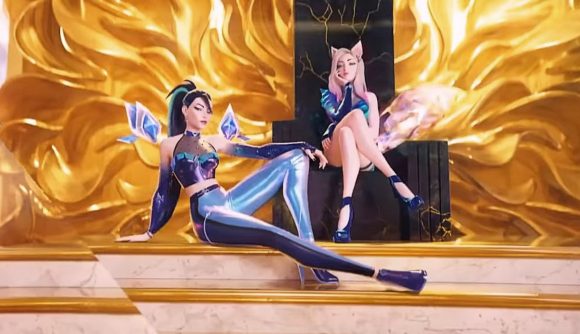 Virtual girl band K/DA has been flavour of the month in the League of Legends community and the hype train keeps rolling with another new single that will more than likely kick off the final of Worlds 2020.

The new track MORE will be well-received by long-time fans of K/DA as it brings back the four artists that performed the band’s debut single (and absolute banger) Pop/Stars in 2018. That’s (G)I-DLE duo Soyeon and Miyeon, Madison Beer, and Jaira Burns, by the way. That quartet is joined on MORE by Chinese pop star Lexie Liu. New LoL champion Seraphine also makes a guest appearance in the track, but it’s not confirmed if Liu is the voice behind her.

While we’ve had teasers dropping throughout the week at what the MORE music video would look like, it comes as little surprise that all the members of K/DA – Ahri, Akali, Kai’Sa, and Evelynn, plus Seraphine – are donning their ALL OUT skins which drop in League of Legends tomorrow.

With confirmation last month that K/DA would be performing at Worlds 2020 and the convenient timing of MORE’s release, it’s pretty safe to assume that a performance of the track will be featuring in the opening ceremony for the final on Saturday, October 31. Or maybe we’ll get a K/DA medley? Either way, we’re pretty excited for it.

K/DA’s reunion has gone down extremely well with fans and has seen content spread across not just LoL but Riot Games’ other Runeterra-based titles as well – even if fans were disappointed with Evelynn’s haircut.

This is all building up to the release of the band’s first EP, ALL OUT, which features MORE, The Baddest, and three other tracks. The EP is scheduled for release on November 6.