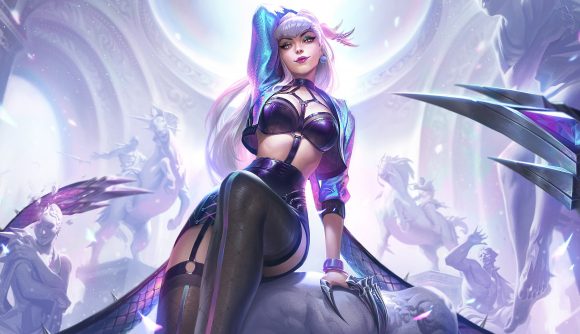 As all four members of K/DA – and new champion Seraphine – had their ALL OUT skins debut on the PBE this week, some fans of League of Legends champion Evelynn noticed a disappointing change to her in-game model that wasn’t shown in the skin splash art: she’s had a haircut.

As spotted by Dot Esports, the official splash for K/DA ALL OUT Evelynn shows her with long, flowing lilac hair. Very glamorous. However, when fans went to view the new Evelynn skin in the PBE they found that she has a very different hairdo. Instead of the flowing locks, K/DA ALL OUT Evelynn has her hair tied up in a short ponytail which constantly rests on her right shoulder. While it is only a slight visual tweak, Evelynn and K/DA fanatics were left angry about her misleading splash art, with some going as far as accusing Riot of “false advertising.”

Riot’s skin QA lead, Katey Anthony, took to Twitter to explain the change and apologise to fans. “After discussion + investigation with the team, it is not feasible to style her hair to reflect what Eve’s promotional piece has. We do see the discrepancy and apologize that this isn’t what you were expecting, based on teasers and splash.”

Anthony goes on to say that a long, flowing hairstyle would have resulted in significant “clipping” within Evelynn’s character model, and that it would have taken a lot of work to change her animation to facilitate her actual K/DA ALL OUT appearance.

This is due to both rig + animation limitations – her rig lacks the bones for a long, flowly hair style + this style would cause significant clipping throughout many of her animations, none which could be minimized without legendary-tier animation work – essentially new animation

While some fans are clearly disappointed with the decision, the skin still looks pretty amazing and it’s likely that it will still be purchased liberally by K/DA stans and Evelynn mains despite not truly reflecting her initial splash art.