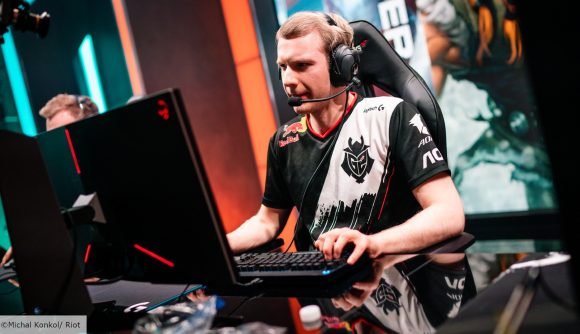 G2’s jungler Marcin ‘Jankos’ Jankowski proved – if proof was really needed – that there is a chasm of a skill gap in League of Legends after solo stomping five Iron-ranked players to win a game in just 17 minutes.

Jankos, who just three days ago was guiding his team to victory in the LEC against fellow European heavyweights Fnatic, decided to flex his metaphorical muscles on those at the opposite end of the competitive LoL spectrum. The 2019 Worlds runner up jumped into a lobby in which he challenged the opposition to give him just three bans and any champion he wanted and he could beat them all without any teammates. After banning Tryndamere, Master Yi, and Jax, Jankos then picked Camille to take on the 1v5 – with devastating results.

In 17 minutes and two seconds, Jankos ripped the opposition team apart, clocking up 34 kills and zero deaths as the five Iron players (who ran a team of Sona, Mordekaiser, Lee Sin, Heimerdinger, and Maokai) crumbled.

After his victory, Jankos says “it’s crazy how easy it is” to use Camille to dominate his opposition by just having those three bans in place.

While it’s probably not all that surprising that a player of Jankos’ calibre secured the win against low-level players, the fact that he managed to remain deathless despite having five different champions to contend with speaks volumes.

For the five Iron players, it was certainly a trial by fire that they’ll never forget, but that don’t stop them trying their luck, with one trying to bag a jersey and another asking Jankos to help him fulfil their dream of playing for G2, to which the jungler says he’ll “ask Carlos” about.